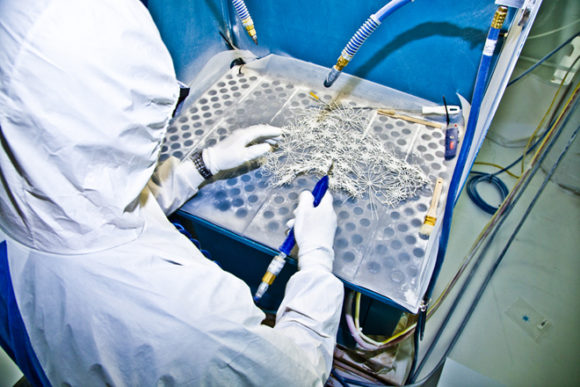 Today, Shapeways may be nothing more than a company that uses 3-D printers to help designers create quirky figurines and modernist jewelry. But according to founder and CEO Peter Weijmarshausen, the longterm goal for the New York City-based outfit is to bring manufacturing back to America’s cities.

“We believe manufacturing should be local,” Weijmarshausen said on stage at the TechCrunch Disrupt conference in New York on Wednesday. “Our view is, over time, more and more Shapeway factories will appear in places all over the world, and in those places, not only will we get products to you faster and at a lower cost, but we’ll have lower impact on the environment for transportation.”

SHAPEWAYS FACTORIES NOW PRINT ABOUT 1,500 PRODUCTS A DAY, OR ONE PRODUCT EVERY MINUTE.

Shapeways, which launched in 2007, is different from other 3-D printing companies like MakerBot. It doesn’t want to put 3-D printers in homes or sell them to other businesses. Instead, Shapeways runs its own factories in New York City and Eindhoven, The Netherlands, where designers can send their work to get printed for them. That means Shapeways can use higher-end materials — like brass, silver, and even gold — to make products. The company’s factories now print about 1,500 products a day, or one product every minute, and according to Weijmarshausen, the day when these factories can mass produce products is not far away.

“I think that’s the future we will go to,” Weijmarshausen said when asked whether Shapeways is moving toward large scale production. “It sounds crazy, but we’re very close to printing these things. Semiconductors already are possible. You can print integrated circuits. You can print transistors. Basically, a radio could already be printed.”

The ability to bring low-cost manufacturing back to city centers and closer to the designers who are creating these products will do a lot of good for innovation, Weijmarshausen said. The more designers and manufacturers can collaborate in real-time — an obvious issue in the offshore manufacturing movement — the more creative and lean they can be.