A Real Piece of Work 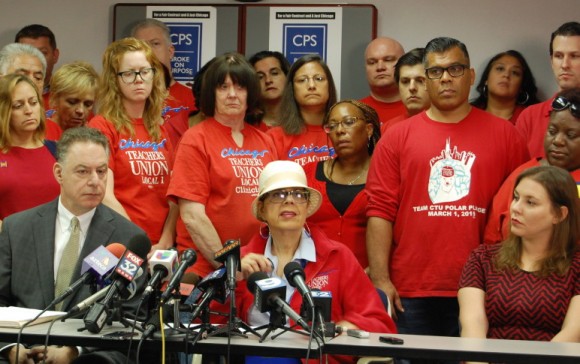 Chicago Public Schools are laying off 462 teachers, because the budget is a hopeless mess and the Teachers Union is much more interested in protecting the pensions of incumbent and retired teachers than retaining young untenured teachers. Meanwhile, Charlotte, North Carolina, is desperate for 200 teachers to start the school year, and the suburbs of San Francisco are bending their certification standards to fill their teacher needs.

But I doubt many of the Chicago layoffs will quickly pack their bags for Charlotte or the Bay Area. It’s just too hard for most people to make those kinds of quick shifts.

It’s a different story in the shale oil fields of North Dakota, where so many folks have been living in trailers because they couldn’t build homes fast enough last year in the Williston Basin. But few of those folks would pick up their lives to get teaching jobs in San Francisco.

The job market is not really fluid and borderless. The national unemployment rate is supposedly 5.3%, but I think the number doesn’t make sense. There should be significant wage pressure at 5.3%, but the government says there is little.

There are very few strikes these days. The push to raise the minimum wage is politically and ideologically driven without a widespread national clamor. People are still stitching together part-time jobs and the demand for independent contractors rather than full time staff seems to be here to stay despite that bright 5.3% number.

The U.S. workforce participation levels are extremely low by historical standards, 62.6%. The last time we were at that level was 1977 and Star Wars, was the flick of the day. In 1977, 30 million people worked in government and services. Today, 80 million plus are in those fields. In 1977, 19 million people worked in manufacturing. Today, it’s 12 million. Women have jumped into the workforce and men have bailed out. Eight of 10 men were working in 1977, today it’s seven.

One thing has baffled me for years in the machining field. Why does almost everybody tell me how difficult it is to hire people to run machines, when I know there are plenty of able people lurking in jobs that are not their cup of tea or are at firms that are closing or in trouble?

Several months ago we were looking for a screw machine rebuilder with setup experience for Graff-Pinkert. Noah Graff made a study of viable advertising methods and we chose to do a campaign with Career Builder. To my surprise, we found many interesting candidates, some from Chicago and others willing to move. We were offering a liberal wage and health insurance package, but I would not call it a wage disrupter.

What it indicated to me was that many potential hirers are too passive and use pedestrian methods to reach out for employees. There are people out there looking to better themselves.

The Charlotte school system should be calling Chicago for the emails and phone numbers of the teachers who are getting pink slipped and send recruiters to Chicago on the next plane.

But the best teachers may not even be teaching today. My three granddaughters were fortunate enough to be taught in their pre-school by a former marketing person at Bank of America. After he had been downsized out of his job at Bank of America he came to the school to work as a maintenance man, but when the opportunity arose he morphed into a superb teacher of young children.

My belief is that most young people do not have enough life experience to know what kind of work will be fulfilling and financially rewarding for them to make a career choice at an early age. I think one reason for the declining work participation rate, especially for men, is that they feel like they have wasted their work lives in boring work and would rather drop out than take another dead end job. Also, government welfare programs and disability options encourage people to stay out of the workforce. A former employee of ours who says he would like to work part time for us now is paranoid about losing his disability status, so he languishes on his couch as his viable work options vanish.

The U.S. labor market is very hard to make sense out of. I think that if the Federal Reserve decides to raise interest rates in September because the economists think we are near full employment, they will be making a mistake. The labor market is a lot looser and inefficient than that 5.3% unemployment number represents at first glance.

Question: Do unions still work for the working person?