A Review: Born on a Blue Day 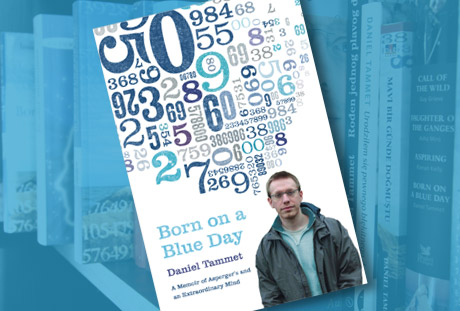 Lloyd and Noah Graff are away this week. We are featuring Jerry Levine’s excellent review of Born on a Blue Day, which is highly relevant today.

America and much of the rest of the western world is suffering through an epidemic of autism. The disease is called a spectrum disorder because it does not manifest itself with a single set of symptoms, but covers a range of behaviors. At the worst, its victims are non-communicative and may do violence to themselves and others. At the best are those diagnosed as Asperger’s Syndrome, where they have above average intelligence, but very limited social skills. The common thread throughout is an inability to relate or even to understand others or to express feelings. Severely autistic people have very limited ability to function independently in the world. Even uniquely skilled “savants” with special gifts are also severely challenged socially.

I have an autistic grandson, Sam, who is turning nine. He’s still a child, but I worry about his future. Even more than my worries, my daughter and her husband live it day to day and struggle with what the future will hold. For example, my grandson was recently invited to his first, and—to date—only, birthday party this year, even though he had all 17 of his classmates to his party earlier this year. Sam is oblivious to the snub, but it pains my daughter greatly.

Born an a Blue Day by Daniel Tammet is a beautiful story of a very high functioning (actually, savant) autistic person. He has unique mental abilities, including an ability remember his early childhood and relate his fears and difficulties growing up.

Growing up was tough. He had warm caring parents, and many siblings, but had no relationship with them. He was the first one taunted and the last one picked in the schoolyard. He was almost never asked over to someone’s house to play. He recognized early on that he was different as a child and wanted nothing more than to be accepted and have friends, but was totally unable to do so. Numbers were his friends, and they came in various shapes, sizes and colors.

One wishes there is a light at the end of the tunnel. For Tammet there was, but his case is very unusual. As he points out near the end of the book,“ It was the strangest thing: the very same abilities that set me apart from my peers as a child and adolescent, and isolated me from them, actually helped me connect with other people in adulthood.”

Born on a Blue Day opens, “I was born on January 31, 1979—a Wednesday.” I recently asked Sam what day January 31, 1979 was, and he quickly responded “Wednesday,” the correct answer. This calendarization is one trait that Sam shares with Tammet. Tammet relates dates to colors. Sam has no explanation for his ability, but then he is not very communicative anyway.

Tammet, who is British, writes of his coming of age and his difficult transition into independent living, which is the heart-warming aspect of this book. After high school he somehow manages to do volunteer teaching of English in Lithuania, and lives for a year on his own. In spite of being a loner, he makes a few friends and learns to speak fluent Lithuanian.

After returning to the UK Tammet realizes his gift for languages and numbers. He gains notoriety by memorizing the first 22,500 digits of pi and makes a public recitation for a charitable fund raiser.

This leads to a TV offer from a major UK channel to do a one hour documentary around his life. He also meets with Kim Peek, the real-life inspiration behind the movie Rain Man, and makes an appearance on David Letterman.

The TV producers have one more challenge for Tammet: learn a new language from scratch in one week in front of their cameras. The language is Icelandic—an extraordinarily complex and difficult language. Amazingly, even though Tammet only has four days because of the TV schedule, he is fluent and comfortable enough to appear in several TV interviews on Icelandic TV and holds his own. He is overwhelmed at how far he has come.

Tammet also falls in love, experiences a conversion to Christianity, and finally appreciates the love he has for his family and their love for him. The book closes with the beautiful passage from I Corinthians: “Love is patient, love is kind…love believes all things, hopes all things, and endures all things. So faith, hope and love abide…but the greatest of these is love.”

His transformation is complete—from autistic child unable to relate to anyone, or even look another in the eye, to a feeling human being, loving and being loved. This is the beauty of this book, and gives this grandfather hope for the future.

Jerry Levine is a writer for Today’s Machining World, and a retired engineer who worked in BP’s chemical division.