Manufacturing in Thailand – the “Detroit of the East” 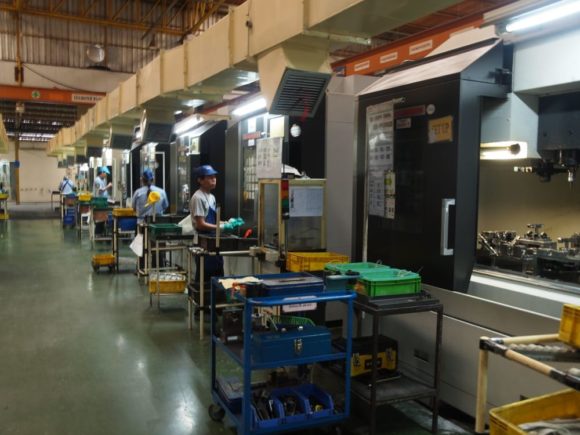 Emily Halgrimson, Today’s Machining World’s Managing Editor, was invited to join 11 other journalists from the U.S. and Canada (six in the automotive sector and six in the food industry sector) by the government of Thailand’s Board of Investment (BOI) on a four-day media tour to promote Thailand’s industry around Bangkok and the Southeastern seaboard.

Saturday, January 14th 10 a.m. – Left Chicago’s O’Hare International for Thailand on American Airlines. It’s not comforting to fly a bankrupt airline’s 757 over the Pacific. The distance is a drawback to North Americans doing business in Southeast Asia – 15 hours to Shanghai and another six to Thailand is a haul. I was pleased to find PBS’s excellent series, Downton Abbey, on the inflight entertainment, but slept most of the way thanks to Benadryl.

Sunday 10:30 p.m. – Arrived at the airport in Bangkok, and while waiting for the other journalists to arrive, ate some of my favorite Thai food of the trip – deep-fried pork with a red coconut curry sauce and Tom Yum soup. Made a vow to eat only Thai food for the duration  –  was not a problem. Transferred to our five-star hotel, Novotel, and were welcomed with plates of Thai deserts, wine and palm-to-palm bows by all.

Monday 8 a.m. – Totally jet-lagged. We visited Western Digital’s (WD) plant in a recently flooded industrial estate near Bangkok and were met by John Coyne, President and CEO. Forty-five percent of the world’s hard drives are produced in Thailand, and WD, worth $10 billion, is the largest company. Their plant was under 1.9 meters of water only weeks before our visit. Divers come in for the most valuable equipment and moved it to a kind distributor’s facility 100 km away so they could decontaminate and repair it while the floodwaters lingered. WD employs 38,000 Thais, most who make under $10/day. I’m not sure what I was expecting, but the modern clean plant was a total surprise. It contrasted heavily with outside the industrial parks, where the country’s poverty is more obvious. Western Digital’s projections for 2011 were $176 million; because of the flood they reached $119 million. No word yet on the cost of the cleanup.

Monday 11 a.m. – Headed across town to the Thailand Board of Investment’s (BOI) Fair. This was interesting. When Westerners hear the word “fair” we think animals and Ferris wheels. In Thailand, a fair is a showcase of the country’s industry direct to the consumer. The fair happens only once every 10 years and was a huge deal. The King of Thailand – whose authority and respect are reminiscent of Kim Jong-ll – is a “green nut,” and the green theme is seen country-wide. The “Royal Pavilion” showcased a “green themed” 3-D film, complete with a tree growing up from the middle of the room, and the finale – a real rain shower (watch your camera). Huge exhibits in the outdoor park included Toyota, the most popular carmaker in Thailand; Chevy, which had its own 3-D show about the evolution of the American-born automobile; and CP, a huge frozen food conglomerate born in Thailand who’s big in Costco. The show also had a beer garden (hint-hint IMTS organizers) and a joyous sort of “look what we have in Thailand” feel to it. The people of Thailand are proud of what they’ve done in attracting these international companies over the last 20-30 years, but seem cognizant of environmental mistakes the U.S. and China have made during their development, and are making an effort to not repeat them.

Tuesday 8:30 a.m. – Attended the BOI CEO Forum. Guest speaker: Tony Blair. A very inspiring and encouraging speech. Interestingly, he noted strongly that America would not be where it is without its open immigration policies. Mr. Blair encouraged Thailand to create this immigration-friendly atmosphere now, and noted that Thailand has “enormous potential” – its people, geography, and relative stability. He emphasized that Thailand’s job was to let the world know that it’s “open for business.”

Tuesday 3:30 p.m. – Left Bangkok for Pattaya, a tourist city next to the Eastern Seaboard Industrial Estate (ESIE) and checked into our spa hotel on the beach – filled with Russian vacationers. Two Thais told me that the Russians are disliked, they are stereotyped as being cheap.

Development in the industrial estate was shocking, in a good way. The government invested millions in infrastructure to attract international companies interested in supplying the Eastern Hemisphere. Roads, electricity and water supply are new, modern and reliable. Ate a fresh seafood dinner at a beach restaurant while the sun disappeared over the ocean and the beer and conversation flowed. Beautiful.

Wednesday 9 a.m. – Visited American Axle & Manufacturing’s  (AAM) Rayong Manufacturing Facility in the Eastern Seaboard Industrial Estate. AAM opened its Thailand operation in 2008. 2010 sales were $2.3 billion. They produce mostly axle systems, but also drivelines, drivetrain and chassis, and other metal-formed products for automotive. The plant is 124,000 square feet and is located in one of Thailand’s many “free zones,” (tax-free). They currently exclusively supply GM’s Thailand operation, but plan on doubling the size of their plant, as they will be supplying Volvo soon. The Auto Alliance Thailand (AAT) manufacturing facility, a joint venture with Mazda, which wouldn’t welcome us for a tour, produces the Ford Fiesta and lightweight trucks for that particular half of the world. I was told that Thailand can’t compete with China’s steel prices, so asked what Thailand’s advantage is over China and India. I was told that it’s Thailand’s supplier base. When GM orders a part, AAM must deliver within 70 minutes.

Wednesday 11 a.m. – I was very interested to tour our first Thai-owned company, the Thai Summit Group, which started in 1977 and makes auto parts for major auto companies. The stamping and injection molding facility makes mainly front and rear bumpers for Mazda and Ford. The plant was impressive and had six 3,000-ton presses and can produce 800,000 bumpers and 6,000 chassis per year. Annual sales are about $10 million. There was a large difference in the atmosphere of the plants from the Western owned companies and this completely Thai run company. They have a basketball court just outside of the main office and President, Mr. Shigeo Sakaki, commented that the workforce there is young and has lots of energy, so they need to have activities for them. It was much more relaxed than Western Digital and American Axle. Young people roamed the grounds like on a college campus. It was nice. They’re obviously making money, but it felt like it would be a nice place to work.

Wednesday 2:30 p.m. – Visited Celestica Thailand, Celestica’s largest location in terms of revenue. They employ 5,630 people and are five minutes from the large port on the Eastern Seaboard and one hour from the airport. They mainly make networking equipment, high-end storage and servers and teleconference equipment (Web cams, phones, digital photo albums, etc.). They see their future in optical device assemblies for the Internet. The Senior Vice President, Mr. Duangtaweesub, was impressive. Thai born, he had studied 30 years ago in Washington State. He started the company, which was bought by Celestica a few years later. He has been running Celestica’s Asia operation ever since.

Thursday 9 a.m. – We were scheduled to visit Magna Automotive and Asia Precision Co. Ltd. in the Amata Industrial Estate, but Magna canceled because they couldn’t get permission from the U.S. office to let us in. Asia Precision was fascinating. It employs about 800 workers (mostly women, Mr. Karoonkornsakul, the CEO noted, because they’re patient, are very good with detail, and there’s little heavy lifting needed) and has over 400 CNC machines, almost all Japanese. They make parts for automotive and camera and their 2011 sales were $30 million, with $40 million expected in 2012. Most of their business comes from the East, but they are a key supplier for Emerson in the U.S., who has asked them to consider building a plant in Mexico, which they are researching now. They are also considering expanding into Indonesia, which the CEO commented would be “the next Thailand,” with production projections of 2 million autos in 2012.

When the automotive crisis hit in 2008/9 they began making rollers for printers. In response to their foreign clients’ needs, they are trying to expand into medical and aerospace, and are facing many of the same hurdles American companies face: the need for skilled employees and regulatory know-how.

Thailand’s Buddhist culture was obvious at Asia Precision. They have weekly company-wide meetings followed by meditation and a singing of their national anthem, and are heavily involved in giving back to their community through projects. They also had the first recycling center we saw, the proceeds of which are donated to the poor. Most of the employees, who are typically age 20-25, are recruited from villages in the north, and once a year they return home for the holidays. They are also very into exercise and health, recently holding a company marathon to raise money for flood victims. The atmosphere of the company was relaxing and the CEO mentioned they have very little employee conflict. It was refreshing to see a company that makes money but has quality of life at the forefront.

Thursday 3 p.m. – Visited the Thai-German Institute, a government training program for industry. This was interesting – I kept wondering why the U.S. isn’t doing something similar, it seemed so obvious. This organization started in 1992 with German funds with the goal of providing high-tech workers to industry. It is now run by Thailand’s Minister of Industry and trains 2000-3000 young people per year, mostly in mold and die technology, but also in automation and machining. It provides workers to the industrial estates in the south, who pay a fee for each worker they hire. Recruiters from training programs like these go to the north in search of competent, bright, high school graduates whom they lure to the south with the promise of decent salaries, subsidized lodgings, and per diems for the duration of training. Then they find them jobs. It appears to be a very win-win system that’s working for Thailand.

Question: Would you consider moving your business or finding suppliers overseas to save money?