My high school class has a Yahoo group to connect with classmates from yesteryear. It is usually dormant except for an occasional obituary notice.

Yahoo recently announced that it is abolishing such groups, perhaps because Facebook has made them an anachronism. The notice has awakened our group. An old friend of mine volunteered to rejuvenate the internet group on Google, which has brought out thank-yous from around the country.

As each person pops up on the Web, I feel a sense of relief that they are still alive and lucid. Sometimes it is a spouse or friend who joins the group for a now-deceased member of the class of 1962. It is sobering to watch the names appear and wonder why some do not.

One of the tough things about the COVID-19 pandemic is realizing that the virus almost selectively kills off older people. For most young folks, it is an annoyance. The unlucky or sick or terribly obese are its targets from ages 30 to 60. From 60 to 75, you probably fare okay if you started out healthy. But over 75 it is truly a scourge, and that is where I will soon reside. 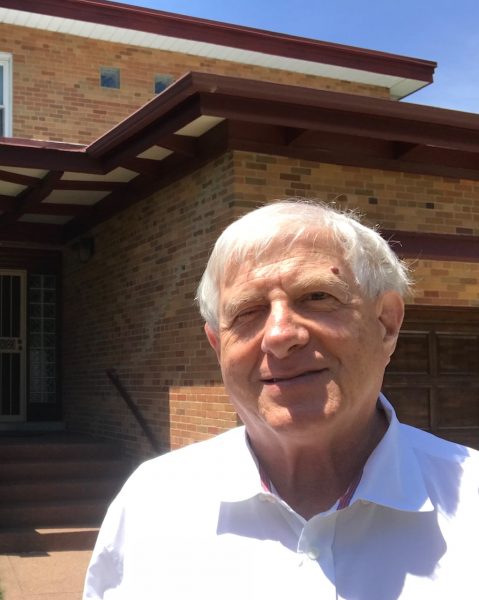 Lloyd in front of his childhood home in Chicago

I swing between the acceptance and rejection of age. One of the most objectionable aspects of Zoom and Skype is that I get to see myself as others see me. I find it different than looking in a mirror in the morning. I expect to look a bit haggard then, and the mirror usually confirms it. But Zoom allows other folks to inspect the configuration of your neck, unless you pull a Pelosi and cover up with a colorful silk scarf. They can see your hair thinning and the expanding sag under your eyes. And maybe they detect the occasional search for the perfect word that used to flow without effort.

But the really weird thing is that on a good day I can ignore all that baggage and feel 35, not 75. I want to go out and shoot baskets. I see no reason why I can’t run six miles before work. And my voice has the timbre of youth.

I do have the privilege of continuing to work and write a blog, which most of my classmates have chosen not to do or have been forced by ailing health or arbitrary bosses to stop doing—unless they are running for President.

Acknowledging my age to myself is awfully scary. I do it, though, every day when I run through my morning prayer ritual and remember friends and family, many of whom died at a younger age than I’ve already attained. The upside for me is to consider that I probably was scheduled to die 12 years ago when I somehow survived a heart attack that is lethal for most people.

Now I get to be what people used to think of as old. I get to wade in the lovely illusion of youth. I daydream of the swish of 10 straight 3-pointers rotating off my fingertips.

Life is strange. I relish it. I cherish it. It’s an amazing privilege to be able to dunk at 75.

Question:  Do you feel younger than your age?

7 thoughts on “As Old as You Look”