My wife Risa and I will celebrate 50 years of marriage this Sunday. It sounds like an awfully big number. I don’t feel old enough for that number, and Risa looks like 45 or 50 on a bad day.

Less than half of the adults in the country are married today, but for Risa and I it was a natural fit. I started talking about marriage a few weeks after we met in January of 1969. She was 17 years old and a freshman at the University of Michigan. I was a graduate student, recently back from military training. Risa had barely been out on a date and suddenly it was hard for her parents to find her at night. They rushed from Charlotte, North Carolina, to meet me six weeks after we met in Ann Arbor. When they learned that I followed a Jewish prayer ritual every morning, similar to that of her father, Risa said she felt like “they gave me away.”

The truth is, that one of the things that has bound us together over those many years is our mutual but different commitment to Judaism. Growing up, I developed a powerful, visceral connection with the Jews of the Holocaust. Although I did not have an immediate personal relationship with people who died at the hands of the Nazis, I could not get thoughts of it out of my head. Risa’s connection was more a social one, connected to Jewish ritual.

My parents accepted Risa Levine of Charlotte about as well as they could. Their basic viewpoint was that nobody was really good enough for their firstborn. But I had never had an interesting girlfriend before, and if I was as sure of myself as I seemed to be, they might as well go along with the program.

Risa and I have had an enormous emotional attachment from the first day of our relationship. On the first night we met at the Michigan Union, we talked until 3 a.m. One reason for this was that my Chevrolet Biscayne wouldn’t start in the January cold when I tried to drive her back to her dorm at 2 a.m.

I recently had returned from Fort Jackson in Columbia, South Carolina. Before I had left for basic training on New Years Day 1968, I had been obsessed with the Vietnam War and fear of dying in the swamps for Lyndon Johnson’s ego. I applied all over to get into the Illinois National Guard or the Army Reserves. Finally, good luck and some family political clout got me into the Guard. I was the only one of 600 recruits in my Company who wasn’t headed to Nam.

Prior to doing my military stint, I didn’t know I was capable of meeting a woman I could have a sustained relationship with. But six months after Fort Jackson, I felt emotionally liberated and looking for a kind, smart, beautiful woman like Risa. Coincidentally she wore the shortest skirt in the crowd of people at the mixer dance in the Student Union that fateful Saturday night in Ann Arbor.

I had gone to the Union primarily to play ping pong, but the music in the ballroom called me that night. I looked around in the big room and spied Risa Joy Levine of Charlotte, while I held on to the ping pong paddle in my corduroy sport jacket pocket. I kept that jacket for 40 years. 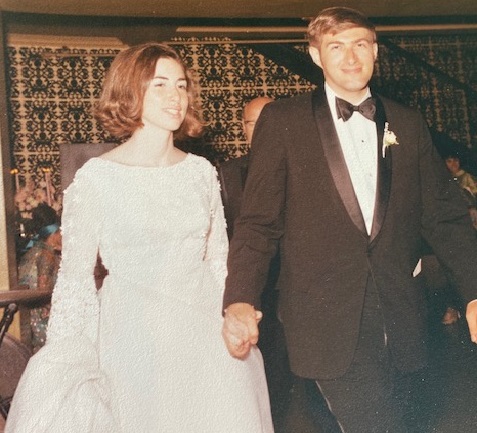 Over the last 50 years, Risa and I have talked about luck, God, and the short skirt that brought us together among 1,500 people in that ballroom. The crazy thing is that Risa was the only person I talked to in that giant room. I saw her, walked through the crowd and said hello. After a few minutes, I asked for her to leave the floor and go out for some food. And she did. Later, I asked her to come to my apartment. And she did.

In our 50 years of marriage, Risa and I have endured the deaths of our parents, life threatening illnesses, the joy of raising three great children, and enjoying four grandchildren. I say prayers of gratitude every day for getting another day with Risa.

I continue to wonder how I was and continue to be so blessed to get these days with her 50 years later.

This Sunday night we are planning to celebrate with friends and family on Zoom. Not how we thought it might happen, but I know if Risa and I are together it will have to be a great night.

Question: Where did you meet your spouse or partner?