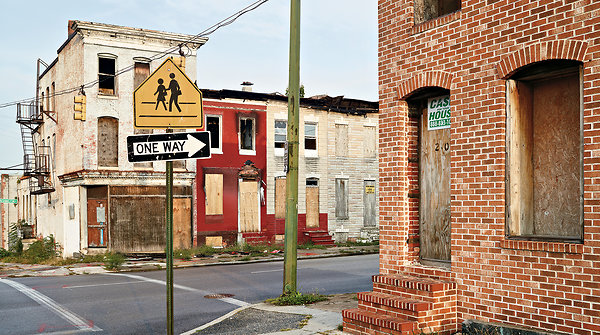 Courtesy of The New York Times.

As anyone who rides Amtrak between New York and Washington knows, the trip can be a dissonant experience. Inside the train, it’s all tidy and digital, everybody absorbed in laptops and iPhones, while outside the windows an entirely different world glides by. Traveling south is like moving through a curated exhibit of urban and industrial decay. There’s Newark and Trenton and the heroic wreckage in parts of Philadelphia, block after block of hulking edifices covered in graffiti, the boarded-up ghost neighborhoods of Baltimore made familiar by “The Wire” — all on the line that connects America’s financial center and its booming capital city.

The weirdness of this juxtaposition is hardly acknowledged anymore, because we’ve all had a few decades to get used to it. But for most of the 180 or so years of the train line’s existence, the endpoints of this journey — New York and D.C. — were subordinate to the roaring engines of productivity in between. The real value in America was created in Newark’s machine shops and tanneries, Trenton’s rubber and metal plants, Chester’s shipyard, Baltimore’s steel mills. That’s where raw material was turned into valued products by hard-working people who made decent wages even if they didn’t have a lot of education. Generation after generation, and wave after wave of immigrants, found opportunity along the corridor. Washington collected the taxes and made the rules. Wall Street got a small commission for turning the nation’s savings into industrial investment. But nobody would have ever confused either as America’s driving force.

This model was flipped inside out as Wall Street and D.C. became central drivers, not secondary supports, of the nation’s economy. Now, on its route between them, the train passes directly through or near 8 of the 10 richest counties in the United States, but all of this wealth is concentrated near the endpointsof the journey: Manhattan’s satellites in northern New Jersey and the towns where lobbyists and government contractors live in suburban Virginia and Maryland. This is a geographic representation of a telling contradiction. For the past 30-plus years, through Republican and Democratic administrations, there has been much lip service paid to the idea that the era of big government is over. Long live free enterprise. And yet in the case of those areas surrounding the capital, wealth has gravitated to the exact spot where government regulation is created. Why? Because many businesses discovered that renegotiating the terms between government and the private sector can be extraordinarily lucrative. A few remarkable books by professors at N.Y.U.’s Stern School of Business argue that a primary source of profit for Wall Street over the past 15 to 20 years could be what I call the Acela Strategy: making money by exploiting regulation rather than by creating more effective ways to finance the rest of the economy.

But how do we make sense of what has become of the in-between? That was the challenge we posed to the South African photojournalist Pieter Hugo. This fall, Hugo spent two weeks documenting life along the corridor, focusing his gaze on what can be found roughly within sight of the train tracks. That was our animating idea and organizing principle: to stop and look carefully at what can be glimpsed only fleetingly from a passing train.

Though industrial decline can have a perversely romantic appeal, we weren’t especially interested in rehashing the sad state of old factories. Instead, Hugo sought out the everyday life that dwells in these fissures of the American economy: the retired factory worker still making his home in a neighborhood that has decayed around him, the kids playing on blown-out streets, the store that sells used tools.

This is an economy changing too fast for the residents to keep up. For many who live along the corridor, the central theme is the decline that’s all too visible. The old brick factory buildings with huge windows that gave workers light and air in a pre-air-conditioned world are boarded up, crumbling or, in a few of the luckier spots, being converted into condos. There’s also another, somewhat more hopeful story on display, though you have to look a little harder to see it. These are the decidedly unromantic houses of modern production: short, vast complexes, built without any nod to aesthetics. There are few windows in these buildings, because precision machinery operates best without the fluctuations in heat and humidity caused by exposure to the sun. They are one story high, because it’s too costly to build a second or third floor capable of withstanding the weight and pounding of massive machinery. There are some workers inside — there to make sure the machines keep running — but not many. These jobs, which go to people with advanced, post-high-school training, typically offer a good-enough wage to afford a house in the suburbs, far from the industrial zones that hug the rail line. The people who do make their lives right next to these factories — in Elizabeth, N.J., or Chester, Pa., say — generally can’t afford the technical schooling that would qualify them for jobs inside.

The atrophying of the country’s ability to “make real things” has been much lamented, but the truth is that U.S. manufacturing has never been stronger. While there are no universally accepted numbers, the United Nations Statistics Division calculates that the dollar value of goods made in America is at an all-time high of $1.9 trillion, just about even with China. The catch is that the number of American workers needed to create all thatvalue has dropped steadily. In the mid-1940s, more than half of the New Jersey work force was in factories; today around 7 percent do. Thereare the same number of manufacturing jobs nationwide as there were in 1941, when the country was just more than one-third its current population. For much of the 20th century — and especially in the boom decades of the ’50s and ’60s, when U.S. factories had little global competition — manufacturing provided something that simply doesn’t exist anymore: a job for anyone willing to put in a hard day’s work. The Boeing plant making Chinook helicopters outside Philly, the Johnson & Johnson campus in New Brunswick, N.J., the Merck plants in Rahway, N.J., and Fort Washington, Pa., and the acres of chemical and natural gas refineries throughout New Jersey, Pennsylvania and Delaware — they all tell the same story: a handful of highly trained workers guiding machines that return huge value to shareholders while all the time finding ways to produce more goods with fewer workers.

That doesn’t stop both presidential candidates from constantly invoking the magnificent working-class economy we once had and can have again, if only we give them our vote. Manufacturing nostalgia is as powerful as ever. But one more look out the Amtrak window reveals something else: the shiny new buildings that are actually filled with workers have nothing to do with manufacturing. They’re in the broad service sector, in the anonymous office centers that bloomed out of nowhere — near Metropark Station in New Jersey and in Claymont, Del., and Aberdeen, Md. — to hold law firms and engineering companies and I.T. firms. For people with advanced training, the service sector means an above-average wage, a below-average risk of unemployment and days sitting at a desk. For those with only a high-school degree or no degree at all, far fewer jobs are available, and the ones that are pay poorly and disappear quickly. Calling for a return to the days when everybody who was willing to put in a hard day’s work could make a good living at the factory is a fantasy, maybe a lie and certainly an implicit acknowledgment that nobody has any idea what to do with the underemployed in the slums of Trenton, Philadelphia, Baltimore and Southeast D.C. It’s safer to talk about Pakistan.

The contradictions along the line converge near the center, in the city that is arguably the most representative of our new and confusing economy. Wilmington, Del., has become wildly successful as the place where Wall Street and D.C. meet. In 1981, Gov. Pierre S. du Pont, who got to office, in part, because of his family’s old-economy wealth, pushed through the Financial Center Development Act, which led to the state’s new economic engine: regulatory arbitrage. For large financial firms, the state offers uniquely compliant rules (European politicians and economists talk, with horror, of the Delaware effect, which will inevitably lead toward ever-looser regulation). The state’s Web site claims that 63 percent of Fortune 500 companies and half of all publicly traded companies are legally incorporated in Delaware — “because we provide a complete package of incorporation services including modern and flexible corporate laws . . . [and] a business-friendly state government” — and yet only two have their headquarters there: DuPont and, notably, Sallie Mae, technically a private firm but one that owes its existence and profit to government guarantees. The rest of the buildings house tens of thousands of highly paid lawyers, accountants and other specialists engaged in the arcane work of taking advantage of flexible, business-friendly corporate laws.

After all those workers return to the wealthy suburbs at the end of the day, what’s left behind is one of the most dangerous cities in America, its unemployment stuck stubbornly two points above the national average. For those who live there, the future is grim. As DuPont’s C.E.O., John Challenger, who might as well have been speaking at any point in the past 30 years, said the week before last, the recent announcement of 1,500 layoffs “may be a harbinger of things to come.”