By Helping Detroit, Did The UAW Lose Its Future? 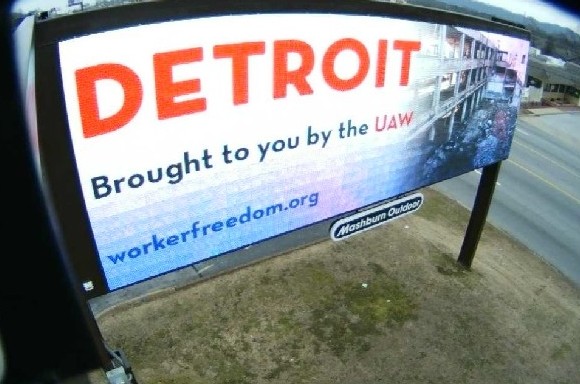 Reverberations continue from the United Auto Workers’ unexpected defeat Friday night in its campaign to organize workers at Volkswagen’s Chattanooga, Tenn., plant.  One key question being asked in automotive and labor circles is whether the UAW gave up its future when it helped the Detroit carmakers get back on their feet.

The discussion stems from the two-tier wage provisions in contracts governing union workers that have been hired since since the 2009 bailouts at General Motors GM +0.89% and Chrysler.

Two-tier provisions have been around for some time, but with the car companies slashing jobs, they weren’t much of a factor until after the bailouts took place.

Thanks to concessions made by the union, the auto companies have added back thousands of new workers, buoyed by less-restrictive hiring terms.

Initially, the UAW agreed that newly hired workers could earn around $14 per hour, compared with $28 for veteran union members. These starting workers, who are called “two-tiers” in auto lingo, have since gotten a raise, but their pay remains significantly below that of longer-term workers.

This creates something of a second-class citizen situation within a union that has always prided itself on solidarity, even affecting workers in the same family, whose pay depends on when they were hired.

While the two-tier structure was devised as temporary, there’s no indication when or if these new hires will ever be able to catch up to the wages their assembly line “elders” make. (In Canada, the auto workers union included a clause that gives two-tiers the chance to get to full pay, although it could take years.)

According to the Detroit News, some VW workers cited lower starting wages for new workers at Detroit car plants as a reason why they turned down the UAW. They didn’t see the point of joining a union, paying dues, and potentially losing political support for Volkswagen, when it wasn’t clear that the UAW could help them earn more money.

One VW worker, Mike Jarvis, said he already earned more than two-tier workers at Detroit factories (although VW workers earn less than veteran workers in Detroit plants). Another VW employee, Ronnie Shaver, said he doubted the UAW could help VW workers catch up to the highest earning Detroit hourly workers. “That’s not going to happen,” Shaver said. “They haven’t had a raise in 10 years.” Both workers opposed the organizing drive.

The two-tier strategy “proved the union’s undoing in the organizing election last week,” wrote David Barkholz, a reporter for Automotive News. “The value proposition to VW workers just wasn’t there.”

Barkholz noted that the union, whose workers did not take a wage cut as part of the bailout, did not try to win wage increases during 2011 contract talks, which took place after the companies were again profitable. The union is now vowing to do so in 2015 contract talks, as Nick Bunkley of Automotive Newsreported Monday.

But, said Barkholz, “That’s going to be too late to win the hearts of VW Chattanooga workers.”

Throughout the past 30 years, the UAW has argued that its representation of workers at Detroit companies benefited those at foreign companies in the United States, which are known as transplants. Indeed, in the initial round of factories opened by Honda, Toyota and Nissan in the mid-South, workers earned wages at or close to rates for veteran workers. This high pay was seen as a crucial weapon in the companies’ ability to keep out the UAW, despite efforts to organize the factories.

But employees at the newer wave of factories in the Deep South are receiving much less than veteran UAW members make. Auto companies doing business in Texas, Alabama, Georgia and elsewhere are able to pay significantly lower wages than the top UAW scale, and even the wages that other transplant workers earn.

While that seems unfair to the newest auto workers, the prospect of jobs in car plants has still drawn hundreds of thousands of applicants, making it clear to the companies that people are satisfied with these lower rates.

The UAW’s future organizing efforts could be made even more difficult if it decides to get pay raises and higher two-tier rates at the Detroit factories in 2015.

On one hand, the UAW feels an obligation to look out for the workers who have formed the core of its automotive membership. But on the other, their higher wages simply raise expectations for the employees the UAW would like to represent. And, those high wages are promises the UAW may be unable to keep, putting the union’s future organizing efforts at risk.