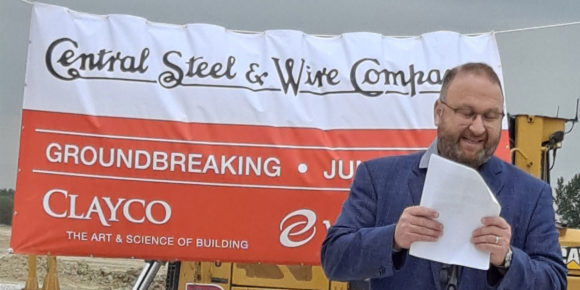 You might think chopping up steel bars would be a fairly mundane business, but for one of the biggest choppers of them all, it’s been, well, awfully choppy in recent years. Last week, Central Steel & Wire broke ground to become our neighbors in the Southern Suburbs of Chicago.

Central Steel & Wire has been synonymous with steel distribution in the Midwest since its founding in 1909 with seven employees by Mandel Lowenstine. His son Maurice joined the firm in 1933, and his younger son Jim joined in 1945 after winning a bronze star in World War II.

Jim took the reins at the company in 1956 and ran Central until 2002, but he had no children. The company went public, but he held 56% of the stock and the Board was loyal to him.

Jim Lowenstine absolutely loved the outdoors and bought 1,200 pristine acres in Land O’ Lakes, Wisconsin, closer to Minneapolis than to Chicago. He had a home there, but his dream was to start a school for kids to develop a love of nature and conserve a piece of the precious forest and wilderness he adored.

His estate, worth at least $100 million, funded a new school, called Conserve.

If only life were so simple!

A provision of his will stated that if Conserve School was a failure, the shares would go to the Culver Military Academy in Indiana where Jim had gone to school.

Culver, and its Chicago lawyers, saw the opportunity of a lifetime after Lowenstine died. They sued, arguing the Conserve School was too small and poorly run to use the millions of dollars bestowed on it, so Culver should get the money.

The lawsuit fattened the lawyers’ pockets for more than a decade, but Culver finally prevailed. Conserve closed its doors in June of 2020.

Meanwhile back in Chicago, the board lost its desire to run Central Steel without Jim Lowenstein and sold out to Ryerson Steel, another publicly-held distribution titan also based in the Windy City. At about the same time, a hedge fund named Platinum Equity bought 66% of Ryerson stock, which it holds to this day.

Since the 1940s, Central Steel has been a fixture of Chicago manufacturing, based on the south side of the city near the Old Stock Yards and Midway Airport.

Business is like a slowly turning wheel, constantly changing.

Trying to run a huge manufacturing and distribution facility out of a congested Chicago neighborhood with consistently rising taxes and an aging workforce with a corporate mentality dictated by volatile stock prices, made its 70-year-old warehouse a liability.

Who would want such a space?

Last week, Ryerson’s president, Eddie Lehner, presided at a groundbreaking in University Park, Illinois, a few miles south of Graff-Pinkert’s building near I-57. It will be a 900,000-square-foot building with a 30-acre solar farm providing the much-needed electricity.

The facility is in Will County, out of the clutches of the political hacks who control Cook County, where Chicago is. It is commutable from the city but will attract a workforce from the small towns nearby like Bourbonnais, Kankakee, and Frankfort. University Park also has Governors State University to feed in younger employees.

University Park is 86% African-American, according to the latest census. I find it significant that a major public company would choose to put a 900,000-square-foot plant into a predominantly black suburb. Ryerson could have built this facility in Indiana or Wisconsin, but proximity to Chicago was more important than race.

The wheel of business keeps on turning and turning. It is usually a good thing.

Could Amazon do steel distribution better than Ryerson?