World trade is like a chameleon, constantly changing colors to survive and flourish. This is why I tend to disregard the Lou Dobbsians who are constantly searching for bad guys rather than opportunities.

With the developing world growing so fast now and the added strain of material flowing to China to heal the wounds of the horrible earthquake, the container system is simply overused. The China trade is sopping up all slack in capacity, which means rates are triple those of six years ago if you can even find a container to send goods from the U.S. to Europe.

The cost of shipping a standard, 40-foot container from Asia to the East Coast has already tripled since 2000 and will double again as oil prices head toward $200 a barrel, says Jeff Rubin, chief economist at CIBC World Markets in Toronto. He estimates transportation costs are now the equivalent of a 9% tariff on goods coming into U.S. ports, compared with the equivalent of only 3% when oil was selling for $20 a barrel in 2000. (Wall Street Journal)

With labor costs and the value of the yuan rising too, China is losing its competitive edge in manufacturing versus the U.S. Even furniture, which gravitated almost entirely to China, is coming back to America.

The container shortage is an annoyance at the moment. Its deeper significance is in the context of world trade. If the protectionists do not mess things up after the election, the seeds are being sown for a significant resurgence in American manufacturing for many years to come. 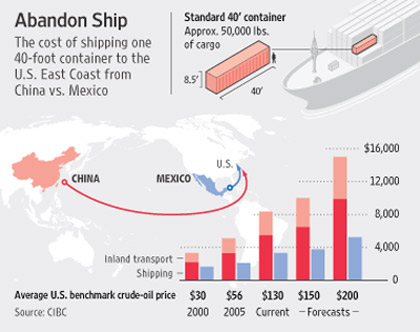