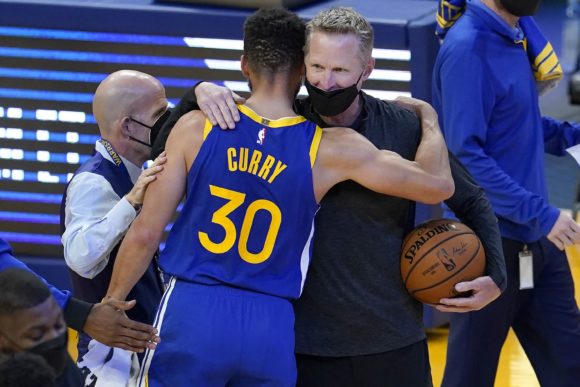 Father’s Day came early for me with the end of the NBA Finals.

The Golden State Warriors won the championship with four of the five players with the most minutes in the final game being the sons of former NBA players. The fifth, Draymond Green, had his Michigan State coach, Tom Izzo, in the stands who was his father figure.

Steve Kerr, the coach, has a father story worth relating also. The Warriors have a culture unlike any other in the League. The leader of the band is Steph Curry. His dad, Dell, played 14 years in the NBA. Quite a bit of it was with the Charlotte Hornets, and he settled there after his career ended and began a new career in broadcasting. He also taught his two sons how to shoot and instilled a love of the game in them.

Hardly anybody in major college basketball saw anything in Steph and Seth Curry, though they had nice high school careers. Steph was offered an opportunity to play college ball only at Davidson, a short commute from his home in Charlotte. Seth went to Liberty, then transferred to Duke. They had the opportunity to practice shooting before the Hornets games and often came to the Charlotte Jewish Community Center where my brothers-in-law, Jonny, Eric, and Miles, also played pickup ball.

Neither Curry would have been considered an NBA prospect as kids, but Steph is a sure Hall of Famer and Seth is one of the greatest 3-point shooters in NBA history. Steve Kerr is one of the few players in the NBA to have ever shot a higher percentage than Seth.

Is it their DNA, the parental coaching, or their passion for the game?

Klay Thompson, Steph’s partner at shooting guard, is the son of Mychal Thompson. He was the first player drafted in the 1978 NBA draft. He was 6′ 10″ in tall, born in the Bahamas, went to high school in Miami, and an All-American at the University of Minnesota. He won 2 NBA championships with the Lakers during the Showtime Years in the late 1980s.

Klay grew up after his dad was out of the league, but he had the pedigree and the drive to come back from devastating leg injuries which kept him out of the League for more than two years before coming back well into his thirties this season to team with Steph in the Warriors backcourt.

Andrew Wiggins was an addition to the Warriors this season. Coming out of Toronto, he was the number one pick in the draft in 2014, but his NBA career had been unsensational, playing on lousy teams in Minnesota and Cleveland. He’d always had talent, but he seemed to be lacking hustle and passion.

His dad, Mitchell, had played 10 years in the NBA for Chicago, Houston, Philly, and more than 10 years for minor league teams. He ended up in Toronto where he married an Olympic silver medallist track star. Andrew was seemingly destined for greatness, yet never quite reached it. Still, the Warriors wanted him badly.

Gary Payton II joined the Warriors mid-season. He had kicked around in the Development Leagues of the NBA for a few years and never stuck with a team. His father was a Hall of Famer, known as a fantastic defender. Payton II developed his defense and the Warriors saw something special in him. The more he played, the more suffocating his defense became.

Holding all of these players together were Draymond Green and Coach Kerr, seemingly so different, but loving what each brought to the team.

Green is viewed by some to be a thug on the court. He is physical and pugnacious. He does not care about scoring, but is a superb passer and a passionate teammate for great shooters like Curry and Thompson.

He was a tough guy from Saginaw Michigan, not a son of the NBA, but rooting him in game 6 was his college coach from  Michigan State, Tom Izzo, and 8 former teammates..

Draymond Green, rough kid from Saginaw, has given more money to his college than any other player who has ever played college sports, over $3 million.

The Warriors coach, Steve Kerr, grew up in Beirut, Lebanon. His dad was a head of American University there, until he was assassinated by two Islamic Jihadi gunmen.

Kerr came back to Los Angeles to graduate high school and then go on to play college ball at Arizona. He played in the NBA with the Chicago Bulls and Michael Jordan, winning three championships, and later played for the San Antonio Spurs, winning two more championships.

After his playing career he tried broadcasting, became a general manager and part owner of the Phoenix Suns, and then gave it up to get back on the court as a coach with the Warriors.

As I watched games 5 and 6, and saw players like Wiggins and Payton II play so much better than they had ever played in their careers, I realized why the Warriors had pulled them into their group.

For someone who loves the game like me, it was a thrilling thing to see. It was a special early Father’s Day gift for Lloyd.

Question: Can a business or organization build a team culture like the Warriors?