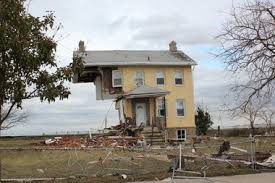 The aftermath of Super-storm Sandy makes me ask the question whether a generator should become standard equipment in homes and businesses. My wife has a big family in New Jersey and New York. Many of them have sought refuge this week at a close by lake home they own jointly that has a built-in generator.

At Graff-Pinkert we lose power several times a year. It has become more than an inconvenience. Our phone and Internet service are tied to the electric grid. I’m starting to think we should buy a generator for the office, and possibly at least a portion of the plant. What are you doing about backup electricity?

Sharp, Olympus, Panasonic – Japanese companies that were icons 10 or 20 years ago – are in a terrible state. Sharp may not survive at all, Olympus has been scandalized, and Panasonic just showed a $10 billion loss.

But at least on the machine tool front, the Japanese builders are generally doing well. Mazak, Mori-Seiki and Okuma are prominent world players. In the specialty niche of sliding headstock lathes, Citizen and Star, arch competitors despite interlocking financial structures (Citizen owns a big piece of Star stock), dominate the world market.

As for cars, Toyota has lost its mojo in recent years, and Honda has become synonymous with boring, though they both make wonderful reliable vehicles.

In consumer goods Japan is slipping badly. Even in video game devices Microsoft’s Xbox 360 reigns, but the real money is in the creative part – the games, where the Japanese are also weak.

Is China the next Japan-like bubble to burst? Or is it us? Will Apple or Google be Sony and Panasonic in 10 years?

I am prepared to reluctantly press the lever for Mitt Romney Tuesday, but I have another interesting choice for Congress. My 9-term Congressman is Jesse Jackson Jr. He is an emotional mess, suffering from bipolar illness and is significantly disabled by it. My Republican Senator from Illinois, Ron Kirk, is recovering slowly from a severe stroke, also.

Jackson will probably win the election because he is running against unknown, tarnished, weaklings. What a great system we have. Jesse’s one “campaign” appearance was a robocall, which could have been recorded by an actor. He primarily told his constituents he is sick – but getting better.

Because I am friends with one of his staffers who cherishes her position, I’ll probably vote for Jesse and see what happens.

Question: If your home was being destroyed and you could only take one thing with you, what would it be?