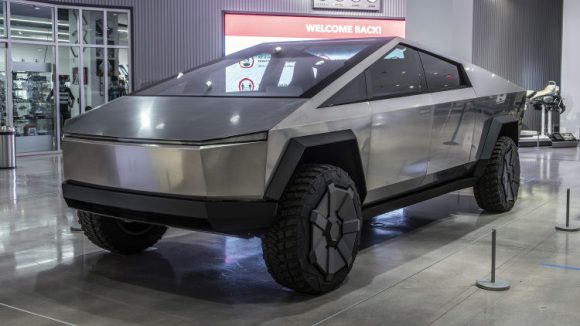 The automotive world is churning these days. New cars are creeping out of the showrooms, but used cars are going bananas. CarMax stock has doubled since April.

Yesterday’s announcement by Ford that CEO Jim Hackett is stepping down should come as little surprise after his 3-year tenure saw Ford’s stock plummet 39%. His predecessor, Mark Fields, lasted only 2 years. Ford’s big plus has always been its F-150 pickup, and it is reintroducing the Bronco, with 150,000 pre-sales to position itself against the Jeep Wrangler. Hackett was an outsider who was recruited from furniture maker Steelcase. His successor, Jim Farley, is a Ford veteran like Mark Fields.

The pickup truck melee is getting more competitive with Elon Musk’s Cybertruck with its radical styling, now gearing up in Austin, Texas, which is also where Tesla’s new battery plant is being built. Musk has reported well over 500,000 pre-sales for the electric truck, priced at $39,000. As usual, he has taken an unorthodox approach to build the vehicle with stainless steel sheets, cut and laser welded, avoiding the cost of stamping out the body and doors with enormous expensive presses. Using lithium batteries is expensive, but making them in Austin in huge quantities will lower costs. The F-150 is cheaper in its base cost, but if we compare apples to apples for a bigger bed and 6-passenger capacity, the price edge goes to Tesla.

An interesting new entry into the electric pickup game is Lordstown Motors in Lordstown, Ohio. This is a start-up being funded by a money group from Wall Street. Who is really putting up the money is vague, but GM just tossed in $75 million and the company will be on the NASDAQ shortly. GM is also building a battery plant near the Lordstown, Ohio, plant, which it built in the 1960s to build the Chevy Caprice. Lordstown is famous for a strike in 1972, in which the UAW infamously turned out cars with torn upholstery in its guerrilla retaliation against the company. To me, Lordstown has always symbolized the downfall of American automotive companies and the stupidity of the UAW.

Will Lordstown Motors, which plans to build a plain vanilla electric pickup with a GM battery using a stealth group of investors, be able to compete with the sexy Cybertruck? It’s not a hand I would bet on.

Another player may be Rivian, which Ford invested in through its Lincoln division but has now walked away from. It is another stealth company, which supposedly got $700 million in backing from Amazon. If they ever really build a competitive electric pickup, they will be as far behind as a Volkswagen diesel.

Not to be forgotten is Nikola, which is planning to build a hydrogen powered pickup truck called “The Badger,” in a non-existent plant in Coolidge, Arizona. They claim to have 20,000 pre-sales, but everything about this company seems weird.

To me, the big question under the surface is do the real people who drive F-150s, Ram trucks, and Silverados really want an electric pickup truck? I know the US government is forcing electric vehicles on us because the sky is falling if we only get 30 miles per gallon from gasoline, but the market is telling us that electric cars, even Tesla’s, are not that useful in places like Chicago or Nashville or Frankfort, Kentucky.

A hybrid makes more sense to me. The technology has been tested for decades and does not require a gazillion dollar charging station infrastructure. Did we all forget that the power plants to fuel the recharging stations run almost totally on fossil fuels in America? Same in China and Europe, and in those places they are still primarily coal-fueled.

I love Elon Musk for his entrepreneurial brilliance, but I still wonder if we have simply bought into the enchanting myth of electric vehicles.

Question: Do you think those who drive pickup trucks really want an electric pickup?