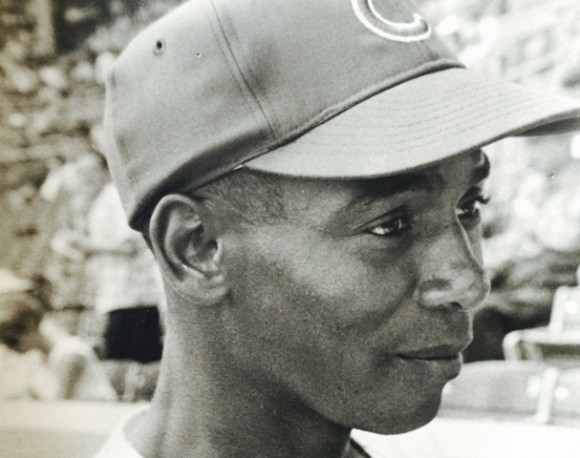 The news of the past week was dominated by the brilliant scoundrel, Bill Belichick, coach of the New England Patriots, and the death of beloved Mr. Cub, Ernie Banks. Could there be two men at the top of their professions more different?

Today I’ll focus on Ernie because I feel like he’s almost been a member of the family. When I was a kid I learned early that I was a member of various tribes that helped define my identity. I learned I was Jewish, white, and Cub. I was a member of an offshoot of the main Tribe, because I was in the South Side sect that rooted for the Cubs, a small minority among millions of Chicago White Sox fans. We did not face pogroms like my brethren in Russia, but we felt like a beleaguered minority in my neighborhood.

In 1953 the Chicago Cubs bought Ernie Bank’s contract for $20,000 from the Kansas City Monarchs of the Negro Leagues. Soon after, they picked up Gene Baker a black Triple A player from the Pacific Coast League who definitely should have been playing in the Majors five years earlier, but teams were slow to break the color barrier even though Jackie Robinson had been in the Big Leagues for six years. Players had roommates on the road and the Cubs felt white players would resent bunking with black players, so they had to have a pair of Negroes on the team.

Ernie Banks was an immediate success at shortstop, as was Baker at second. Everybody got a nickname then and Banks got “Bingle,” and Baker got “Bangle.” The Cubs had a fat first baseman named Steve Bilko, so the new Cubs double play combination was the euphonious, Bingle to Bangle to Bilko. The Cubs were almost always a lousy team, but with Banks and Baker and home run hitter Hank Sauer in left, they were fun to watch on early TV and listen to on radio with the great play by play announcer, Jack Quinlan.

I read the sports pages religiously, even The Sporting News, the Baseball Bible, to keep up with my team. And I studied Ernie Banks assiduously. Ernie had a batting stance like nobody else in the game. He cocked his right elbow awkwardly so his bat was sticking straight up. As he eyed the pitcher his hands were moving constantly on the bat handle, like he was massaging it. I copied Ernie’s stance meticulously and practiced my swing for hours trying to build my bat speed. If it was working for Ernie I figured it would work for me. Banks won back to back Most Valuable Player Awards in 1958 and 1959.

Ernie Banks weighed only 170 pounds but he generated terrific bat speed with his great timing and powerful hands and wrists, which had developed from picking cotton as a kid in Dallas. Banks was one of 12 children. His father had a third grade education, but Ernie had a gift for baseball, an outgoing personality and endless curiosity, which set him apart from his baseball peers. Banks was always smiling and expressing his love for the game. He became synonymous with the phrase, “Let’s play two.” I loved the game like Ernie loved the game. I just couldn’t play it anywhere close to how he did.

I kept following the Cubs through bad times and worse times, dying with them in 1969 when they looked like they were going to win the pennant and then collapsed in September. Ernie was old then, 38 and playing first base, but still a dangerous hitter.

For me baseball wasn’t just a sport. It was a language and a link to talk to people, especially my grandfather and mother. Grandpa Kassel, my mom’s dad, was a taciturn lawyer for a railroad. We really had nothing to talk about except baseball, specifically the Chicago Cubs. We both loved it. He told me about “Jolly Charlie” Grimm and Mordecai “Three Finger” Brown. He went back to the days of “Tinkers to Evers to Chance,” the double play combo of the last Cubs World Series winner in 1908. He actually knew those players because they stopped at his family’s little grocery.

My mom used to excuse me form school and take me to Ladies Day games. I remember seeing Jackie Robinson and Roy Campanella play in one. It may have been the most special thing we ever did together just me and her at Wrigley Field in the grandstand talking baseball.

When she got older and sadder we still had the Cubs to talk about and that special bond baseball fans cherish when they are sharing knowledge.

So when I got the news Saturday morning that Ernie Banks, Mr. Cub, had died, I shed many tears. Ernie was family. Ernie was what I shared with my Mom and passed on to Noah. All three of my kids adopted the Banks batting stance. It’s part of my legacy – and his.

Thank you, Ernie. You’ve been a part of my life for over 60 years. I keep your picture hanging up in my house and look it almost every day. And I’m not stopping now.

Question: Who will win the Super Bowl? Do you care?