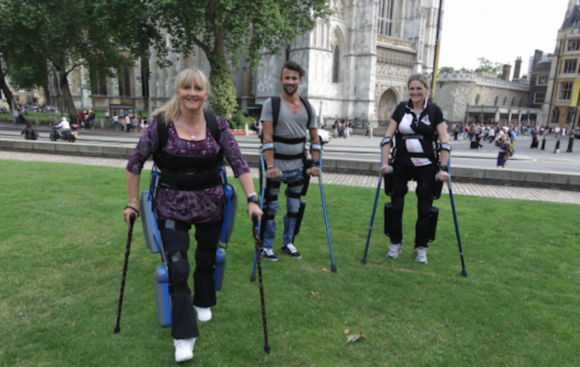 A motorized exoskeleton, designed to help paralyzed people walk again, just earned U.S. Food and Drug Administration approval. It is the first such device to do so.

The device, called ReWalk, straps on user’s bodies and helps those with certain spinal-cord injuries to sit, stand, and walk. Users have to wear a backpack to carry the ReWalk’s computer and battery. They also have to wear a wrist device with buttons to tell the motorized legs when to stand up, sit down, or start walking. But it’s not like users are punching every step into their wrist controllers–ReWalk legs also respond to movements of the user’s torso, so that leaning forward triggers a step. (Popular Science gave the device an Invention Award in 2009 and a Best of What’s New award in 2011.)

The new FDA approval means ReWalk‘s maker, Argo Medical Technologies, or Argo, can now market its products in the U.S. Over the past few years, Argo and other companies that make similar products have tested their exoskeletons on people. Argo has previously sold ReWalk devices to rehabilitation centers in the U.S. but the FDA approval marks the start of sales of ReWalk devices to Americans for private use. Each device will likely cost $65,000 to $68,000, theTelegram reported in March.

The FDA’s announcement about ReWalk details what it is—and isn’t—cleared for. It’s approved for specific spinal cord injuries, but it’s not recommended for people with other severe neurological injuries. The FDA also says users should undergo training before strapping the ReWalk on, and so should a helper for the user—maybe a spouse or a home health aide. Interestingly, the announcement also says the device isn’t for climbing stairs. This is a departure from some earlier news reports about the ReWalk, which showed users going up stairs in the exoskeleton.