I needed a football weekend badly.  It had been a week of business travel, end-of-the-month tension, end-of-the-year push, and what I really wanted was to watch some competitive football on TV and forget about business.  Wow, did I ever get what I was wishing for.

First game I watched was Oklahoma versus Texas for the Big 12 Championship.  I wanted to watch this game for one reason.  “Who is this kid, Kyler Murray, playing quarterback for the Sooners?”

He didn’t play last year because Baker Mayfield won the Heisman for them and became the Number 1 pick in the NFL by the Cleveland Browns.  Mayfield threw the ball a million times a game, and Oklahoma scored 60 points just for the fun of it.  I wanted to know if Kyler Murray was the real thing or the next Tim Tebow. 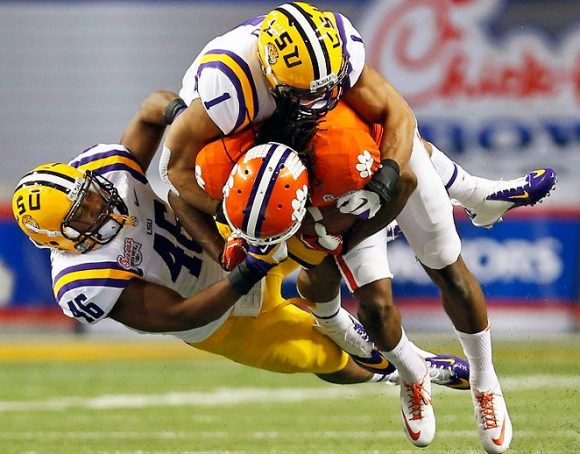 Guys, this Kyler Murray is the real thing.  Against a very capable Texas defense he showed accuracy, passion, and phenomenal quickness as a runner.  Oklahoma beat Texas 39-27, got into the National Playoffs, deservedly, and Murray probably won himself the Heisman Trophy.  And the amazing thing is that Murray is also a terrific baseball prospect.  I foresee him as a Top Ten NFL pick, similar to quarterbacks like DeShaun Watson and Russell Wilson.  Loved watching that game, but it only got better.

The late-afternoon game was Alabama versus Georgia, #1 against #4 in the college rankings.  Alabama was last year’s National Champion, top ranked all year behind the “Throwin’ Samoan” Tua Tagovailoa, who was recruited out of Hawaii to play in Tuscaloosa.

Tua had put up amazing numbers all season and ‘Bama has been completely dominant, but Saturday Georgia was even better—most of the game.  The Bulldogs led by two touchdowns in the middle of the third quarter and had completely ruined Tagovailoa’s game with a brutal pass rush.

The back story for the Crimson Tide is that its coach, Nick Saban, who everybody loves to hate, except his players, had replaced Jalen Hurts, who had brilliantly led the team for two seasons, with the Throwin’ Samoan because he was a far superior passer.  But Tua couldn’t deal with the pressure Saturday afternoon and finally was forced out of the game with an ankle injury.  In comes Hurts to finish the game and come back from a seemingly insurmountable Georgia lead.

The rap on Hurts was that he was a lousy passer, but on this Saturday he threw like Joe Namath.  Alabama rallied, and Georgia crumbled.  With very little time remaining Hurts bluffed a pass and ran a quarterback draw play for the winning touchdown.  It was an incredibly emotional finish when the substitute, who everybody thought should have left “Bama when Saban benched him, embraced his coach who was almost in tears on the podium accepting the Conference trophy.  I felt like crying sitting in front of my TV in Chicago.  This is why I love football in December.

On Sunday the Chicago Bears played the New York Giants without their starting quarterback, Mitchell Trubisky.  The Bears are trying to go from last to first in their division and had an 8-3 record going into the game, but with Chase Daniel, a career backup at quarterback, against a team with a still-capable Eli Manning and Rookie-of-the-Year running back Saquon Barkley, in New York, it was going to be a tough game.

The Giants played better than the Bears, particularly in the second half.  With less than two minutes left in the game the Giants punted the ball to the Bears end zone and with fantastic athleticism downed the ball on the one-yard line.  The Bears were down a touchdown.  On the first play Chase Daniel throws a short pass to Taylor Gabriel.  The Giants defender punches the ball out of his hands, and the fumble is recovered by New York on the ten-yard line.

But the Bears did not give up.  The Giants played traditional safety-first football, figuring that a field goal puts them up 10 points, a seemingly insurmountable lead with one minute left in the game and the Bears with only one timeout.

This is FOOTBALL in the NFL.  The Bears took the kickoff and quickly marched down the field.  They were stopped deep in Giants’ territory and opted to kick a field goal to save time.

With less than a minute left, the only long-shot chance the Bears had was to try an onside kick.  Only 3 of 39 such kicks had been successful this season, but the Bears recovered the ball when the overrated, self-proclaimed Giants’ superstar O. J. Beckham, Jr., casually sauntered to the bouncing kick allowing the frantic Bears to recover it.

With just a few seconds left, the Bears moved the ball towards the end zone culminating with a halfback pass by the team’s star, Tarik Cohen, a 5’7” dynamo from Bunn, North Carolina, for a touchdown at the buzzer.

The Bears lost in overtime, but the comeback was fantastic.

I was still not totally footballed out, so I checked out the Sunday-night game, Pittsburgh Steelers versus the L.A. Chargers.  You watch this game because it is Phillip Rivers versus Ben Roethlisberger, both Hall of Fame quarterbacks who have weathered a hundred injuries and concussions but play with a passion that even a baseball nerd can enjoy.

It was another nutty game of two totally different halves.  Pittsburgh rushed Rivers like madmen early, and Rivers struggled, even though he has the fastest release in the game.  L.A. racked up two yards rushing in the entire first half and trailed 21-3.

Seemingly, the Steelers were exhausted after their brilliant start, and Rivers began a counter-assault.  Players on both teams were dropping like flies in the contest, but Rivers kept throwing, and his top receiver, Keenan Allen, kept catching (14 receptions).  Pittsburgh’s big lead melted, and the Chargers pulled ahead in the end with a winning field goal.

I was exhausted, but exhilarated.  I was looking for a football breather from real life, and this weekend gave it to me.

Question: Do you enjoy the violence of football?