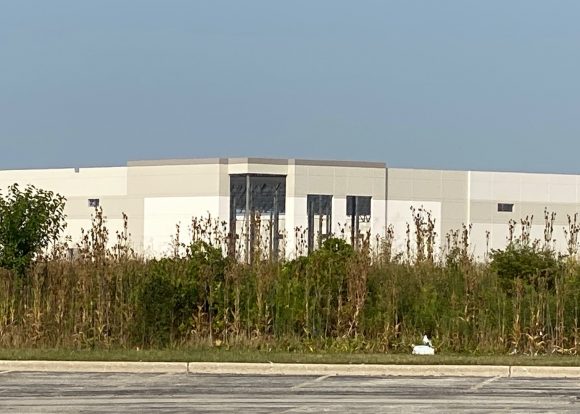 Like desert marigolds flowering out of nowhere, 4 million square feet of new buildings are going up simultaneously this week in the primarily African American South Suburbs of Chicago where I live and work.

Twenty miles north of here in Englewood, where my dad grew up and attended High School, people are shooting at each other every night and connecting with disturbing accuracy. The daily carnage is staggering and overflowing into the expensive Magnificent Mile of North Michigan Avenue, leaving it looking like Beirut’s downtown.

Amazon loves the South Suburbs. They already have built half a dozen fulfillment centers in the area and are building two more. One of them is within walking distance of Graff-Pinkert, and the other is near my favorite corn stand. The Logistics Center of 2 million square feet, consisting of four expandable buildings, is also in walking distance. It is located on a 102-acre site, which was supposed to be an outlet mall until Amazon growth killed that idea. Its closest neighbor is a multi-story apartment building, built just a few years ago, which accepts people who have lost their jobs and have nowhere to go. The developers jumped on the site when they could put together $29 million dollars in tax subsidies from the village and county, plus the tax advantage of being in a designated Opportunity Zone with the recent tax law changes.

Add in cheap mortgage money and a great location between two interstates, plus an abundance of inexpensive workers with lousy job prospects in the neighborhood—and bring in the excavators.

The broker for the logistics project says there is an industrial real estate boom taking place, with Amazon picking up half of the new space in Chicagoland.

What is it like for the $15 per hour people who are drawn to the thousands of Amazon jobs, before the robots make them obsolete?

A woman who used to clean our friend’s house went to work for Amazon in Joliet a half hour west of the new fulfillment centers. Her work consisted of opening boxes 10 hours a day, four days per week. She wanted the job because it was her first opportunity for full-time work that offered health insurance. It was also an opportunity to get free tuition at a local community college if she worked for Amazon for 18 months.

It was demanding physical work and took its toll. Both of her hands absorbed enough punishment to require surgery. Her dream of training to become a nurse’s assistant sterilizing instruments was postponed by these injuries.

I am a capitalist, an investor, and a happy customer of Amazon. I think Jeff Bezos is a genius who has enriched me and my family because I invested in Amazon stock over 10 years ago and have held on to it. Bezos himself was born to a 17-year-old mother. His father, who he barely knew, owned a small bike shop in Albuquerque. His mom got an education, moved to Florida, and married into an upper-middle-class world. Jeff went to Princeton but he started Amazon on a prayer, and it is now worth hundreds of billions of dollars.

Our former cleaning person will not be taking another job at Amazon with her damaged hands. The two new 865,000-square-foot fulfillment centers will each hire a thousand workers for bigger packages, but Amazon has proudly announced that the buildings are built for robots when they become more capable.

The South Suburbs, the stepchild of Chicago real estate, is finally bustling. It has the cheap land on the interstate highways, and, above all, it has cheap people, the folks who will line up for the grueling jobs that more efficient, stronger robots will eventually take.

Capitalism drives America, and I love it. But it does come with a cost. My Amazon stock is up 2,218%. The gulf of income between people with securities and those who dream of sterilizing instruments keeps growing, but with Opportunity Zones and other tax breaks, we’ve got 4 million feet of new buildings blooming in my backyard.

Question: Have you lost workers to Amazon?