Help Me With My Skunks 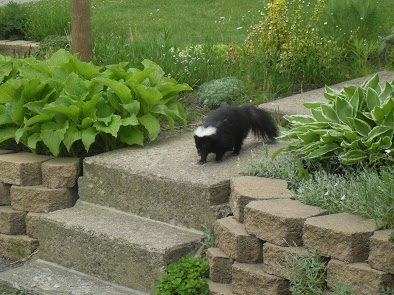 I feel like my 20,000-square-foot house’s lot is a wildlife preserve.

Three weeks ago, a deer gave birth to a fawn in a group of bushes in our backyard. The baby lay well-hidden while its mom left for long periods because deer know how to be discreet around potential predators. She would come back in the early evenings to nurse and clean the fawn, then quietly leave when she saw her baby was hidden away again.

This went on for a couple of weeks. My wife sensed the phase was over, opened our fence, and we have not seen the pair since.

A few weeks before that incident, we hired a trapping service to capture an animal that looked like a badger or a raccoon from a quick view, who had found an Airbnb under our front steps. The animal evidently suspected that it faced eviction with the procedures the trapper had taken, so the apartment under our steps lay vacant for several weeks despite conscientious efforts aimed at extraction of the animal.

Finally, a groundhog who had claimed residence was removed. Whether the animal removed was the original one we spotted is unknown.

We felt happily unzoolike until yesterday night when Risa spotted a mama skunk and her four baby skunklettes under the same steps. Somebody must have advertised the vacant Airbnb under the steps.

Chipmunks, birds, deer, and the occasional raccoon we can share the lot with, but not skunks and their kids.

Supposedly, citrus peel, ammonia balls, and coyote urine pellets send a clear eviction notice to skunks, but I’m wondering if any readers have extensive knowledge in this area. The skunk family is one foot from our front door. They are not welcome at the Graff House.

Change of topic to bears.

We are now unequivocally in a bear stock market, and I hate it as much as I hate skunks.

My IRA is mostly in stocks. Apple, Amazon, Costco, and Microsoft have been awfully good to me over many years, but not right now. Inflation and rapidly rising interest rates are like coyote urine pellets to stock speculators. You would think it was 2008 by the speed stocks have sunk, except it isn’t. People are still spending, business confidence is high, unemployment is at 3.6%, and banks and consumers are flush.

Real estate is getting softer with mortgage rates jumping, but rentals are strong, warehouses are still hot, and shopping center parking lots are fairly full.

It appears to me that bankers like Jamie Dimon of Chase see an opportunity to finally pull in deposits by talking up a recession and interest rates. Credit cards have been bonanzas for major banks for many years with their humongous interest rates. With other payment approaches gaining market share, banks are still poorly valued by the stock market. I shed no tears for them.

The machine tool business has had a beautiful rebound in North America as China has looked less and less attractive for manufacturing. The oil and gas business is having a major uptick despite green energy grabbing some market share with $6 gasoline. But will it be back to $3 in a year? Nobody knows, but drilling is growing at a conservative pace, which probably makes sense to everybody except consumers.

We will have elections in November. Most observers think the Democrats will lose a lot of ground because of President Biden’s unpopularity.

Personally, I do not see a landslide, but the House should go to the GOP if only because of Florida and Texas gaining more seats and states like New York and Illinois losing them. The Senate will continue to be quite even. Pennsylvania, with Dr. Oz running against a pretty sick cardiac patient, John Fetterman, who is 6’10” tall and only wears shorts, should be fascinating. Donald Trump’s support of Oz might not help him.

Enough with politics and stocks. Help me with my skunks!

Questions: What methods do you know of to make skunks go away? When will gas prices go back down and stocks go back up?