How Will the Keystone XL Pipeline Be Built? 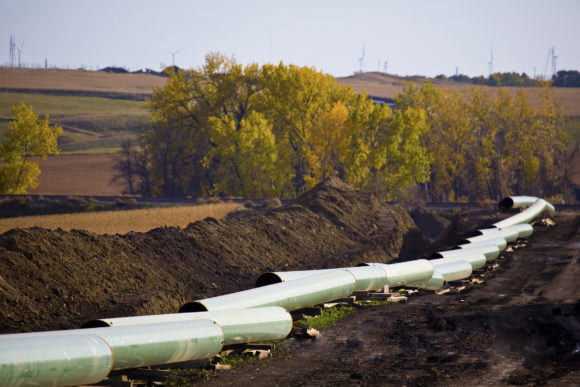 If President Obama approves the hot-button Keystone XL pipeline, TransCanada has plenty of work to do to build the Montana-to-Nebraska connection. This is how its engineers plan to do it.

After more than four years of controversy, the Obama administration is expected to make a final decision this summer about whether the controversial Keystone XL Pipeline can be built in the United States. If the administration green-lights the project, which was proposed in 2008, it will go from hotly debated idea to a monumental engineering undertaking.

The pipeline would run 875 miles from the Canadian border to Steele City, Neb., where it would join already-built sections of pipeline that carry oil to the Texas Gulf Coast. Keystone XL would carry 830,000 barrels of crude oil each day through its 36-inch pipeline that would run along a 110-foot-wide ribbon of land. Building a project this size will take 400,000 tons of steel and provide work for 7000, laboring over a period of about two years. If the project is approved this summer, it is expected to be operational in 2015.

Before TransCanada (the company planning the pipeline) can move any dirt, the U.S. Department of State will hear public opinionabout the hotly contested pipeline through mid-April. On March 1, the State Department issued a draft supplementary environmental impact statement for the pipeline, a technical document detailing how the 1179-mile pipeline’s 875-mile leg on U.S. soil will be constructed and how it might affect the environment. So how will this monster infrastructure project come together?

Beginning on the Canadian border in northeast Montana, Keystone XL will snake across South Dakota and Nebraska to Steele City. TransCanada must obtain rights for the construction right of way. According to the company, it will build Keystone XL in 10 segments, mostly during warmer months, on a total of 15,493 acres of land. The pipeline will be buried about four feet beneath the ground and require a 50-foot permanent right of way along its entire course. “Large pipeline projects are typically built in segments, or ‘spreads,’ so that construction can begin in several locations along the route simultaneously,” TransCanada spokesman Grady Semmens says.

Timothy Considine, a University of Wyoming economics professor and petroleum market analyst who worked on pipelines while in college, says that the construction isn’t really the greatest challenge for Keystone. Compared to the engineering feat of the Trans-Alaska pipeline, a 48-inch pipe running 800 miles over several mountain ranges from Alaska’s North Slope to the Pacific Ocean, the Keystone XL has little in the way of complicated geology posing major challenges for engineers. “It’s an easy go,” and pipeline construction will become a major, if temporary, source of employment, he says.

TransCanada plans to use 561 construction workers per spread, plus 100 additional workers for each of the 20 pump stations along the route, which ribbons through some very remote regions of the Great Plains. “As you can imagine, building a pipeline like Keystone XL is a major undertaking, which requires extensive project management, contractor scheduling, and access to skilled workers such as pipefitters, welders, inspectors, and environmental technicians. Dividing the project into spreads allows for work to proceed as quickly and efficiently as possible during construction seasons,” Semmens says. To house all those workers, the company plans to build temporary 600-bed work camps in remote areas using modular housing units. The camps will be complete with food-service facilities, a convenience store, laundries, entertainment rooms, and medical services.

Bulldozers and trackhoes will clear and grade the pipeline right of way. Then a convoy of ditching machines and trackhoes will dig a trench about seven feet deep and about five feet wide to house the pipe. Workers then weld the pipe’s pieces, lower it into the ground, and backfill on top of the pipe. Once the pipe is laid, another army of bulldozers, tractors, and mulchers will follow, restoring the construction site.

The trickier parts come when Keystone’s path crosses a river wider than 100 feet, such as the Missouri, Platte, Niobrara and 11 others. To get across, TransCanada will drill a borehole for the pipeline that arcs deep beneath the river using horizontal directional drilling, similar to the way many energy companies drill gas and oilwells. “This involves boring hundreds of yards across and below riverbeds to ensure the pipe is laid in stable bedrock where it is not vulnerable to flooding and other environmental impacts related to rivers and streams,” Semmens says.

TransCanada plans to purchase the pipe itself from steel mills in Arkansas and Saskatchewan, with about 40 percent of the steel originating from Canada, 50 percent from the United States, and 10 percent from China and South Korea. To prevent pipe corrosion and crude-oil leaks, the pipe will be coated with a corrosion-resistant epoxy. Also, TransCanada plans to use a measure called cathodic protection, in which impressed electrical current flows through the surface of the pipeline. Cathodic protection uses a device called a rectifier—a transformer which is connected to nearby power lines and converts alternating current to direct current. The electricity flows through the pipeline itself, with the rectifier on one end of a pipeline segment and a buried bed of anodes on the other. As the electric current flows through the pipeline, the exposed pipe metal is protected from corrosion.

After the pipeline is built and operating, TransCanada plans to inspect Keystone XL for cracks, corrosion, leaks, and other problems in many different ways, including routine patrols of the line from both the air and the ground and internal sensors that monitor for problems and help maintain the line. One of those is an internal sensor called a PIG, or pipeline inspection gauge, which travels the inside of the pipe. “The PIG is a high-tech electronic scanning device that examines the interior of the pipeline for any signs of cracks, corrosion, or other defects of concern,” Semmens says. “The PIG is inserted into the pipeline and travels through the line and is removed at one of our above-ground pump or compressor stations. The data is then downloaded onto a computer for analysis.”

The Keystone XL Pipeline is part of TransCanada’s larger Keystone system built to move synthetic crude oil and diluted bitumen from both the Alberta oil sands and North Dakota’s Bakken shale oil play. Part of the pipeline south of Steele City has already been built — a segment from Steele City to a crude-oil terminal in Cushing, Okla. The southernmost segment, stretching from Cushing to the Texas coast, began construction last summer and is expected to be complete later this year.

At the moment, there’s no guarantee that Obama will approve Keystone XL, a project environmentalists oppose because they fear spills could harm water resources along its route through the United States and because exploiting Canadian oil sands could speed up a changing climate, but that the oil and gas industry see as a way Canada and the United States can bring North American crude oil to market.

And while environmental-based opposition lingers, so do economic questions: According to Considine, any pipeline more than 1000 miles long (which Keystone XL will be when it joins the existing segments) is at the limit of its economic viability because of the construction and maintenance costs. But, as PopMech reported before, those Canadian oil sands will be extracted one way or another.