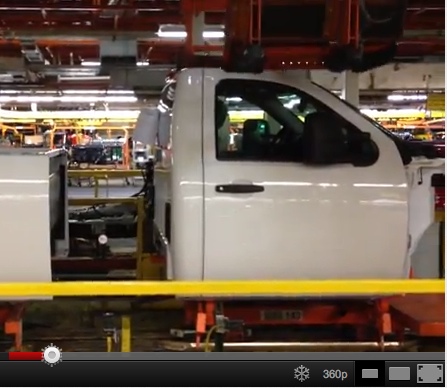 I was in Northeast Indiana last week for a press junket promoting the manufacturing sector of the region. The first company we visited was the General Motors plant in Roanoke, IN, a 716 acre facility with 35,000 employees where they build light and heavy pickup trucks–476 trucks in an eight hour period we were told. Our guide Mike Glinski, manager of Fort Wayne Assembly, a GM employee of 26 years, really impressed me with his presentation. He was one of the best speakers on the trip and we were all pleasantly surprised how relaxed he was about letting us shoot photos and video as we toured the line. He said the facility even gives tours to the public with an appointment.

I couldn’t believe how immaculate the facility was. The operation was well organized and highly automated. One topic that was discussed as we toured the different companies on the trip was Indiana’s strong political movement toward a “Right to Work Policy,” which would allow employees to work at any business without having to be in a union. A GM plant with employees not in the UAW just sounds unfathomable. But stranger things have happened right? After all, they took out the lard and then the trans fats from Oreos and they’re still delicious (and kosher!). In any case, Glinski’s intelligence and openness, along with the positive vibes I got touring the factory gives me optimism that GM is finally taking the steps to compete in today’s lean economy.

Best to check out the video below to get a better sense of the place.

Wearing both my reporter and machinery dealer hats on the tour in Indiana I asked some of my presenters about what types of equipment they were buying lately. At one shop specializing in medical implants, the president  told me he was shying away from buying Mori Seiki lathes because after the U.S. partnership with DMG he had lost trust in the organization and customer support of the company. Most agree that DMG’s equipment is some of the best available worldwide, but they’ve always been notorious for weak customer support in the U.S. Merging with Mori Seiki was supposed to raise the company’s game in that respect, not pull down Mori Seiki’s.

But the next day we went to C & A Tool, a diversified, successful job shop (many times referenced in Today’s Machining World). The people at C & A told me the company had recently purchased several DMG machine tools, which they love. Their rationale for buying the DMG machines–C & A engineers had gained confidence in DMG after it had combined forces with Mori Seiki. So the merger of the two machine tool companies is working sometimes.

Kim Jong-il’s son Kim Jong-un is about to replace his deceased despot father. One of the few things people know about Kim Jong-un is that he’s a huge NBA fan, a Chicago Bulls and Michael Jordan fan in particular. Supposedly the Jongs had a huge full court in the backyard of their palace, and when Kim Jong-un was allegedly studying in Switzerland many people remarked that basketball was one of his main uses of spare time. If Obama and Kim Jong-un ever end up meeting, the two leaders at least have one common passion on which to relate to each other. Maybe they can just settle their differences over a game of one on one.

Happy to say that the Today’s Machining World blogs are getting plenty of traffic and comments lately. We often are surprised by the reactions of our readers and we get to learn a lot from their perspectives. For instance, when Lloyd wrote the blog about Newt Gingrich, we received a high number of comments by people saying they couldn’t support him because of his gun control politics. When we published the blog, Newt’s politics on gun control hadn’t even crossed our minds as an issue people would comment on, let alone that it would be a deal breaker for votes. The opinions were so strong it reminded me of an abortion rights debate.

Question: Was the Iraq War worth it?

Videos of General Motors plant in Roanoke, IN