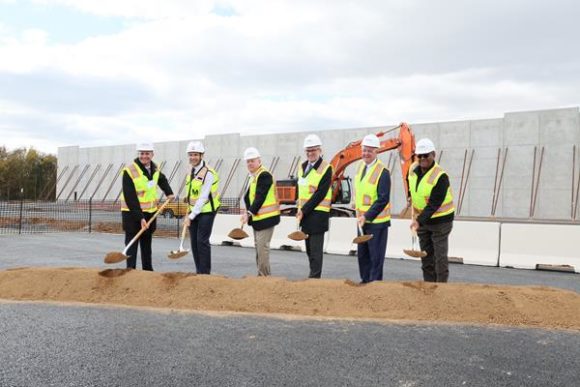 When fully operational, the factory will sustain 1,300 jobs, with up to 460 working directly for Hitachi Rail on site. The new jobs will command total earnings of $350 million per year and bring major economic benefits to the DC, Maryland, and Virginia region.

US construction firm, Ryan Companies, has been appointed as the lead site developer. The construction program is progressing well – with land clearance, creation of the concrete deck and the majority external concrete walls completed – and the factory is set to open on schedule in early 2024.

Maryland Governor, Larry Hogan, and Maryland Congressman, David Trone, along with WMATA General Manager, Randy Clarke, were hosted by Hitachi Rail CEO, Andrew Barr, at the site facility today and given an exclusive first glimpse of final designs for the site and the progress of construction.

Once completed in the first quarter of 2024, the factory will begin work to deliver its first order: 256 new 8000-series railcars for Washington Metropolitan Area Transit Authority (Metro). The contract, announced in March 2021, includes options for up to 800 cars to be built. When fully operational, the factory will be able to complete up to 20 railcars per month in a single shift, with the capability to produce a wide range of trains from metro to high-speed services.

The construction program, led by Ryan, is on schedule, with the latest phase seeing them install 248 concrete wall panels, each of which is 13’ x 36’ and weighs around 35,000lbs. In total, the program will require 1,050 tons of steel to complete factory building, which includes joists, girders and structural steel columns. The creation of the facility will also include the pouring of 12,430 cubic yards of concrete, enough to fill almost four Olympic-sized swimming pools.

The factory’s manufacturing capability will be enhanced by innovative technological solutions, drawing on Hitachi Rail’s 100-year expertise and global manufacturing heritage to deliver its most advanced digital factory to date.

As a business committed to becoming a climate change innovator, Hitachi Rail will also use the latest techniques to create a factory that uses energy and resources efficiently to protect the environment.

Delivering for the region

The construction and operation of the factory will be a major boost for regional economies across Maryland and the greater Washington DC region. Nearly 60% of the construction value of the factory is to be spent with suppliers from across the region, which equates to more than $40M in direct and indirect economic impact. Small businesses are expected to benefit too, with more than a quarter (c27%) of the total expenditure anticipated to go to Small Business Enterprises (SBEs).

In addition to the boost from the construction, the up to 1,300 jobs the factory will sustain – direct, indirect and induced – will be a major boost to the economy. Hitachi Rail anticipates starting its recruitment program in earnest in early 2024.

Andrew Barr, Group CEO, Hitachi Rail, said: “With construction of our new train $70m factory on schedule and progressing well, we are one step closer to delivering a new, high quality fleet for the Washington DC Region’s Metro. It is exciting to be able to release the final designs of our new facility with its cutting-edge Lumada technology. Manufacturing pioneering trains is core to our business, and this factory, with its new workforce, will have the capability to build trains for all of North America.”

Maryland Governor, Larry Hogan, said: “It is exciting to see the new Hitachi Rail factory coming together as the job creation potential and associated economic benefits will be an absolute game changer for Washington County as well as the entire region. This transformative project is further proof that the Hagerstown region is a major logistical center for rail transportation with unparalleled connections to the northeastern United States, and is yet another shining example that Maryland is truly open for business.”

Congressman David Trone, said: “This new factory in Hagerstown will deliver over 1,000 good-paying jobs to the community and strengthen our public transportation options across the entire Metro system. After looking at Hitachi’s final plans for the factory today, it’s clear that this effort has an incredible return on investment for Marylanders. It’s crucial that public transportation allows folks to get to work on time, pick up their kids, or just get from point A to point B. I welcome Hitachi Rail to our district and look forward to the economic opportunities this facility will bring to Washington County.”

Randy Clarke, General Manager and CEO, Metro, said: “We are proud to have Metro’s new 8000-series railcars built in the National Capital Area. Creating local jobs and economic benefit for the region was essential to Metro and will return Metro’s investment to families, businesses and the region we serve.”

Kyle Schott, vice president of real estate development at Ryan said: “Ryan Companies is excited to have the opportunity to support Hitachi Rail in its efforts to improve passenger and freight rail transportation in the United States and North America. It is a privilege to lead the development of this state-of-the-art facility and with construction on schedule.”

About the 8000-Series Metrorail cars

The 8000-Series will increase reliability, offer modern on-board technology and an improved passenger experience. The Metro trains will have popular features that include:

The all-electric vehicles, with 130 seats per pair of cars, will be a major upgrade when they replace the 2000- and 3000-series fleets, which have been in service since the early 1980s. For Metro, the new fleet will help improve the service for passengers, be easier to maintain and reduce costs.

Hitachi Rail’s $70M factory investment represents a continuation of its commitment to improve passenger and freight rail transportation in the United Sates. Across North America, it already employs more than 1,400 people and has its headquarters in Pittsburgh, Pennsylvania. While the factory in Maryland will focus on building trains, Hitachi Rail is delivering programs across the entire transportation sector; from major signaling systems to building completely new railways, and supporting rail freight firms nationwide.