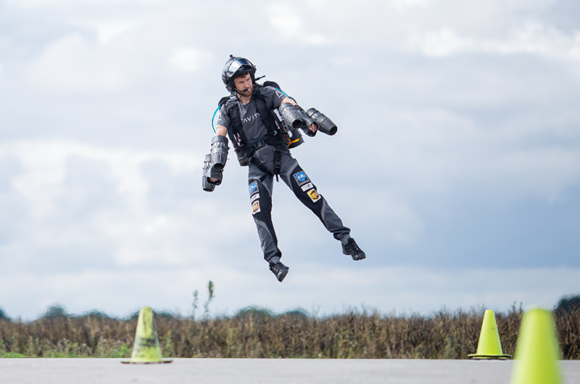 Chicago has been the backdrop for a number of superhero movies. So, when Richard Browning joins us at IMTS 2022 and takes to the sky in his Jet Suit — the patent for which explicitly refers to “Iron Man” — he should look right at home.

On Wednesday, Sept. 14, at the entrance to McCormick Place, Browning — a technologist, inventor and founder of Gravity Industries, Ltd. — will demonstrate what’s possible when science, technology, engineering, and math (STEM) are put into action by piloting his Jet Suit over McCormick Square. IMTS attendees will have three chances to catch Browning take to the sky, at 9:30 a.m., 11: 30 a.m. and at 1:30 p.m. on the third day of the show.

IMTS is meant to be many things, but among them is a showcase for what happens when STEM is applied in real life. Browning’s flight is just one example, and he’s made no secret of the fact that he shares IMTS’ goal of inspiring the next generation of STEM students.

“We are an almost Marvel-character manifestation of what STEM can deliver,” Browning has said. “Flying a 1050 BHP Jet Suit in front of a crowd of school children is a brilliant way to power the kids’ imaginations and ignite a passion for the science and engineering behind it.”

Aside from just being objectively cool, Browning has noted that the Jet Suit also serves as a potent example of some STEM basics. “Newton’s Law; action and reaction can be described using the Jet Suit. The remarkable human ability to balance can be illustrated through the vectored method of thrust control, used in the Jet Suit,” he said. “We don’t just encourage the passion in STEM, we demonstrate it, putting it right in front of curious minds in a way that they can see, hear, touch, and smell.”

So, skip the matinee, and join Browning as he demonstrates what could be the next frontier in human flight at IMTS. We’ll provide the thrills, you provide the popcorn.

Professionals, register now for IMTS 2022. Students, teachers, and parents, can register complimentary for the Smartforce Student Summit at IMTS 2022.