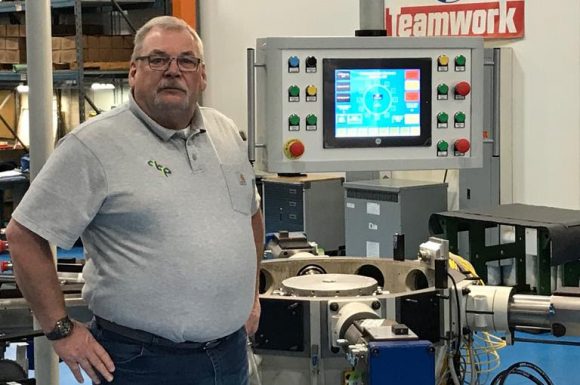 After nearly four decades of experience in Hydromat engineering and remanufacturing, Mark Fordyce, now Vice President of Hydromat-RE has announced his retirement. He officially stepped down from his position as of September 25th, 2020.

Mark began his career as a Hydromat machine set-up/design production supervisor in a small shop in Rockford, IL in 1981. After applying to Hydromat, Inc for a technician position he was hired as a Project Engineer working in the Hydromat engineering department. In the 18-1/2 years with Hydromat Inc, he worked his way through the Hydromat engineering department in various roles, eventually being the Engineering Manager. In 2006, Mark joined Component Bar Products, where he led both the engineering department and the rebuild, repair parts, and machine repair division. After the 2019 JV of Hydromat-RE and Component Bar Products’ Rebuild Division, Mark continued to service Hydromat users as the Vice President of Hydromat-RE and led the team from the O’Fallon, Missouri facility.

Mark has been an integral part of the Hydromat organization, and his contributions will continually be valued. Hydromat, Inc., Component Bar Products, and Hydromat-RE thank Mark for his hard work, commitment, and dedication over the years.