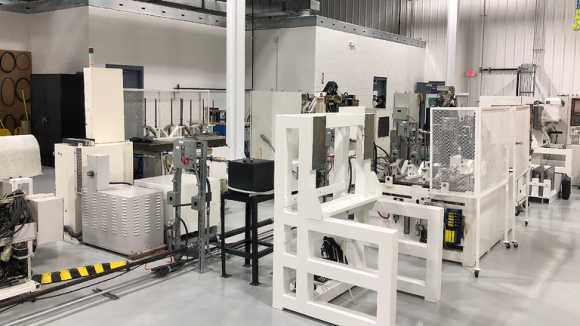 Mazak Corp. has completed the expansion of its Spindle Rebuild Department at its North American headquarters in Florence, Ky., a $15-million project announced in May 2019. The project is among a range of capital-investment programs for the machine-tool developer, including new technical centers in Northern California, Florida, and Canada.

The expanded Spindle Rebuild Dept. has a 10-percent larger work-area and “a clean, bright and ergonomic workspace to streamline operational flow, efficiency, and speed.” The new workspace is placed closer to the Mazak Parts Department, and it incorporates some new, advanced technology, including spindle balancing units, especially intended to accommodate larger spindles.

Mazak’s North American manufacturing operations and headquarters in Florence have been steadily expanded over the past two decades, and the aim for the Spindle Rebuild Department was to establish a larger shop able to accelerate spindle rebuilds, from 70 to 100 spindles rebuilt each month, according the project announcement.

While new spindles continue to be an option for machine tool customers, the expansion allows Mazak to keep rebuilt spindles in stock and available for exchange.

The Spindle Rebuild Department supports every Mazak machine-tool spindle in North America, the developer emphasized, over 2,000 different models covering a wide range of horsepower ratings and speeds. The expanded department will keep upwards of 1,000 rebuilt spindles in stock, ready for exchange, especially for Mazak’s most popular machine models.

In addition to in-person visits, soon Mazak will offer an interactive 360 Kentucky Campus Tour, which will include the expanded Spindle Rebuild Department and the entire manufacturing campus as part of a digital customer experience that also will include online events and access to new Mazak manufacturing technology.