Universal Robot launches URCaps: The new “app store” for the UR robots 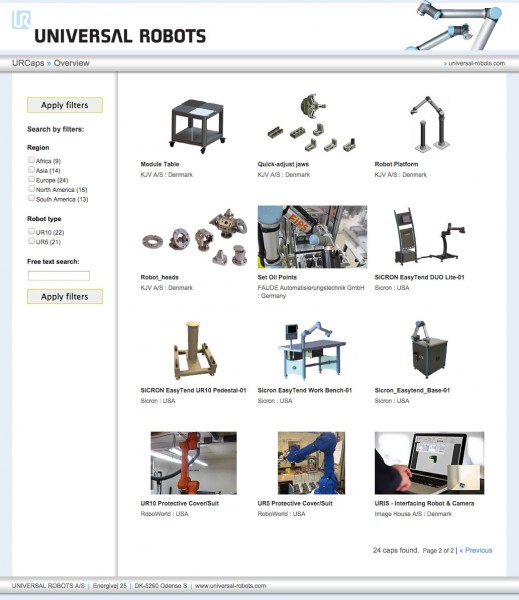 East Setauket, NY, December 11, 2014: With URCaps, Universal Robots has created the equivalent of an app store for robots. The new online platform features useful accessories, hardware and software extending the capabilities of the robot arms developed by the Danish robot manufacturer.

Until recently, industrial robots were so complex that industry most often bought them as part of a comprehensive – and expensive solution – from a machine builder or system integrator. But the new generation of small, flexible robots are so user-friendly that end users now increasingly buy a “stripped” robot from a robot distributor, custom outfitting and installing the unit with end effectors themselves.

“As a frontrunner in collaborative, user-friendly robots, we’re seeing a wave of demand in smaller companies that never before used robots. We want to make it easier to go from idea to finished installation by providing a shortcut to proven combinations of robots and accessories based on the good experiences of other users,” said Esben Oestergaard, CTO of Universal Robots.

“Many robot applications around the world actually look a lot like each other, but there is not a collective place where you can go and find out where for instance to buy a protective sleeve for a robotic arm. That’s why we decided to create the URCaps platform, which aligns with the idea that UR robots should be easy for everyone to incorporate.”

Build confidence with off-the-shelf items
Caps are an abbreviation of the word capabilities. The first 43 caps are already featured on the platform. These caps have been through a thorough trial integration testing. It is also a vital requirement that URCaps must be proven and in use within the industry.

“Quick and painless implementation and high uptime are the alpha and omegas in the global industry. By choosing solutions from URCaps, both distributor and end-user get high security and predictability that applications will run well from the start. URCaps can save weeks and months into the process from concept to operation of the robot in production. If a robot installation becomes a problem, it can be complicated to determine what the source is. URCaps allows you to choose a proven combination of robot grippers or other accessories from the beginning to prevent delays and aggravation,” said Mr. Oestergaard.

The first URCaps are a combination of workbenches, vision solutions, cables, jaws and grippers. The business model for URCaps is simple and transparent: Any supplier of robotic accessories and solutions that have proven to be suitable for UR robots can download an application form at: www.universal-robots.com/URCaps.

After this, the dialogue with Universal Robots begins. If the proposal is approved by UR, suppliers can now offer their products directly to interested buyers in the countries where the CAPS are sold. A filtering function allows prospects to sort URCaps according to different parameters.

Universal Robots does not profit from sales made through URCaps. The only requirement is that customers purchase the robots from an authorized UR distributor in their home country.

URCaps in brief
URCaps is a platform where distributors and integrators can present accessories that run successfully in UR robot applications at end users.

About Universal Robots
Universal Robots is a result of many years of intensive research in robotics. The product portfolio includes the UR5 and UR10 models that handle payloads of up to 11.3 lbs. and 22.6 lbs. respectively. The six-axis robot arms weigh as little as 40 lbs. with reach capabilities of up to 51 inches. Repeatability of +/- .004” allows quick precision handling of even microscopically small parts.

After initial risk assessment, the collaborative Universal Robots can operate alongside human operators without cumbersome and expensive safety guarding. This makes it simple and easy to move the light-weight robot around the production, addressing the needs of agile manufacturing even within small- and medium sized companies regarding automation as costly and complex. If the robots come into contact with an employee, the built-in force control limits the forces at contact, adhering to the current safety requirements on force and torque limitations.

Intuitively programmed by non-technical users, the robot arms go from box to operation in less than an hour, and typically pay for themselves within 195 days. Since the first UR robot entered the market in December 2008, the company has seen substantial growth with the robotic arms now being sold in more than 50 countries worldwide. The company is headquartered in Odense, Denmark where all development and production is carried out. The company’s global sales target for 2014 is 2,000 robots followed by a doubling of sales every year from 2014 to 2017. www.universal-robots.com.