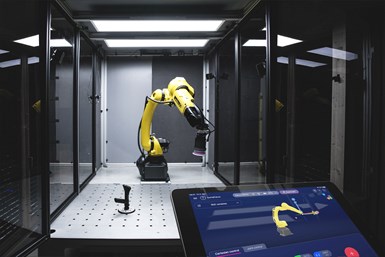 The integration of Wandelbots Teaching for FANUC-brand robots is in development. Over the course of 2023, the first version is to be launched into the market.

Headquartered in Oshino, Japan, FANUC, which has been active in factory automation since 1955, produces its robots in highly automated factories at the foot of Mount Fuji. FANUC is also a leading manufacturer of CNC controllers and servo motors, as well as entire processing machines, and has over 100 robot models in its range. Its offerings range from large and small jointed-arm robots for handling and welding,  Scara and Delta robots (for the food industry, for example), to collaborative robots such as the lightweight CRX Cobot series and the green CR Cobot series.

Wandelbots says the implementation of robotic processes is traditionally very complex. To make a robot ready for use, experienced developers have to program every step of the process, and Wandelbots says high costs and a lack of skilled personnel are currently slowing down the pace of automation. The no-code solution, Wandelbots Teaching, is based on agnostic software with a user-friendly interface that works the same for every robot. Different models from different manufacturers can thus be taught in the same way; therefore, users are enabled to work independently with robots without any programming knowledge.

“Wandelbots’ goal is that all robots, regardless of manufacturer or model, can be controlled with our technology. With the integration of FANUC, we are getting a lot closer to our goal,” Bernd Heinrichs, co-CEO of Wandelbots, says. “Having another robotics manufacturer in our portfolio allows us to open up new markets and provide Wandelbots Teaching to a wide range of companies. For Wandelbots, FANUC also has special relevance, as we are currently entering the U.S. market, where FANUC is widely used.”