The Chicago Bulls are playing the Cleveland Cavaliers in round one of the NBA playoffs, and I just cannot resist comparing Michael Jordan and Lebron James.

Let’s break this down.

1. Defense: As a defender Jordan was a consistent all pro, but he was not a shot blocker. Lebron defends well and is a superb shot blocker when he wants to be. Advantage Lebron.

2. Rebounding: As a rebounder Jordan was instinctive in his positioning, thus ending up with numerous triple doubles. Lebron is taller but seemingly is out of rebounding position more than Jordan. Advantage Jordan.

3. Passing: I like Jordan, but he had the advantage of Phil Jackson’s coaching and triangle offense, which had more motion and thus more opportunities for assists. Lebron is a good passer but Cleveland’s style of offense and his penchant for dribbling and one on one play makes me say advantage Jordan.

4. Outside shooting: Jordan improved as he got older, but Lebron has better range. Advantage Lebron.

5. Driving to the basket: Jordan might have been a bit more creative, but Lebron is incredibly strong. Advantage Lebron.

6. Intangibles: Six titles make me go with Jordan as a leader and winner, but Lebron is also a leader. Jordan had a coach and mentor in Phil Jackson. Lebron basically is the bench coach for Cleveland. As of now, Advantage Jordan.

My overall assessment today: Lebron is the superior player. He will win championships. I hope he stays as focused and dedicated as he seems today.

Question: Which player do you think was/is better in his prime? 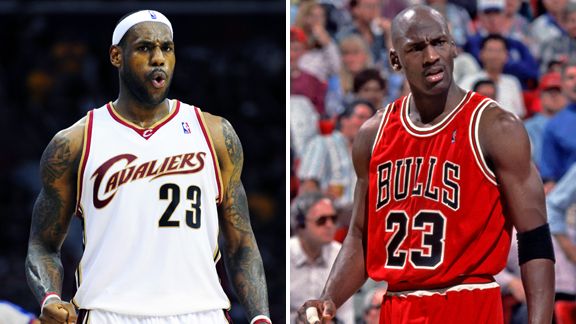 From "The Scores Report."