My Dinner With Newt 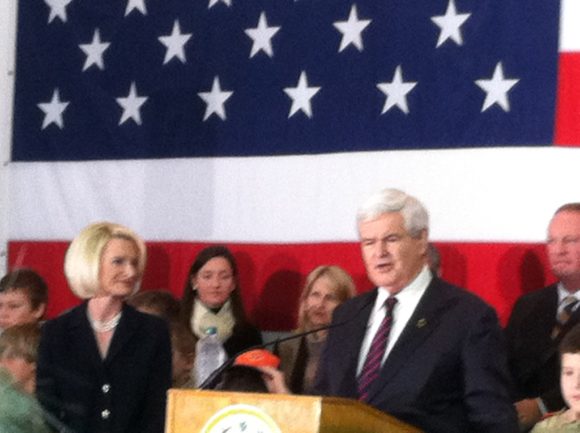 I just returned from a long weekend of political-tourism in Charleston, South Carolina. It didn’t start out as a Newt-Mitt chocolate kind of trip, it just happened.

My oldest son Ari challenged me to lose 25 pounds. I said, “Okay, if I lose 25 and you drop 15 we’ll go on a trip, just the two of us without wives to a place of mutual interest” (that Southwest flies to). I lost 23 pounds (close enough) and Ari ran the Chicago Marathon and slimmed down in the process, so we decided a few months ago to go to Charleston, South Carolina.

Ari is a foodie, so I challenged him to pick the restaurants. I’m an eater, so I knew we’d be compatible. But the bonus we hadn’t planned for was that the South Carolina Republican Primary was last weekend with the Thursday debate in Charleston. We both love politics almost as much as biscuits, so this was going to be our equivalent of Seinfield’s George Costanza making love, watching TV, and eating a pastrami sandwich simultaneously.

An aside to this: When I was in the ICU after heart surgery Ari came into the room to visit. I had an intubation tube so I couldn’t talk, but we could communicate if I wrote notes with my fat Sharpie. Ari broke the news that John McCain had picked Sarah Palin to be his Vice President. I wrote, “Who is she?” He told me she was the Governor of Alaska that nobody had ever heard of. I wrote, “McCain just blew it.” This was the day after my quadruple bypass plus valve surgery, so you can infer that politics is our “inside baseball.”

We checked into the Market Pavilion Hotel last Thursday and planned our schedule around the debate and our dinner reservations. We went to a classy restaurant named McCrudy’s at 5:30 p.m. so we could be ready for the debate. The food was brilliant, especially my dessert, an intense dark chocolate goo with a thin layer of beets. Sounds ridiculously gourmet, but it was divine.

We hoped to watch Newt dunk on Mitt at a bar, but they all had ESPN on, not CNN, so we hustled back to the hotel.

The warm-up shows were all about the ABC interview with Marianne Gingrich (wife #2) nailing her ex about this 1999 mistress (wife #3, Callista) and Newt asking her for an “open marriage.” The excitement built, and John King of CNN, the inquisitor for the debate, did not wait to pop the question of the “open marriage.”

Newt was ready. Wow, was he ready. “I’m SHOCKED” you would ask such a despicable question about my personal life, he glared. And launched into a redmeat diatribe against the ELITES of New York and Washington.

It was right out of the movie Casablanca, when the wonderful Claude Rains (Captain Renault) enters Rick’s establishment and says, “I’m SHOCKED” that there was gambling going on,” just as Peter Lorre comes by and hands him his winnings.

Newt clobbered King, and then Mitt answered the question about whether he would release his tax returns with a “maybe.” Game on. Game lost in minutes. I said to Ari when Romney flinched, “We just saw history.”

The next day we got up early and trekked over to the Mills House Hotel where Morning Joe, the entertaining MSNBC Show with former Republican Congressman from Florida Joe Scarborough and Mika Brzezinski host politicos of all stripes. They were interviewing satirist Steven Colbert, a South Carolina native who was lampooning everybody. Colbert was funny, though not nearly as brilliant as Ari and everybody else seem to think. After the show we took a photo with the show’s hosts Joe and Mika, who were warm and charming, and then looked for our next meal (excellent sweet potato pancakes with a latté at Eli’s).

Next stop was the College of Charleston for a Colbert/Herman Cain rally. Cain was out of the race, but close to 10,000 people showed up on the campus square to be regaled by the Cougarettes (the University’s cheerleaders), a pep band, a marching band, and a gospel choir.

Colbert sang the Star Spangled Banner gospel-style, and Herman Cain strode in elegantly with his stylish black Indiana Jones hat. The crowd was the most all-white group of college kids I’d ever seen. You would have thought you were in a Charleston country club. Maybe we were.

Colbert did his shtick. Cain was friendly but dumb, and one of the gospel singers fainted. But the brass bands were loud and good.

Ari wanted to schlep out to the Romney rally in North Charleston, but I wanted to save my energy for Newt’s rally later at the U.S.S. Yorktown, a retired aircraft carrier, so we walked back to the hotel to prepare for an early dinner at Fig, and later the Gingrich. Dinner was again superb with Ari’s sorghum walnut cake with cinnamon ice cream being the absolute “bomb.”

We then hailed a Jordanian cab driver named “Eddie” who hauled us to the Yorktown, where we had the chance to watch Newt answer softball questions by Sean Hannity of Fox News.

Whether it’s Kobe Bryant or Tom Brady or Newt Gingrich, it’s fun to watch somebody who is a real pro get on a roll. And Newt was definitely on a roll that night. He had enough magnetism to reset a compass. The man glowed. He hit all the high notes on Obama, and brought up “Lenin’s disciple,” Saul Alinsky (a community organizer in Chicago in the 1950s whose son, David, I went to high school with). He described Obama as the “food stamp” President and then double backed to those evil New York and Washington ELITES.

Later at the rally on the aircraft carrier, after being anointed by General James Livingston, a Congressional Medal of Honor recipient, Newt pounded the same themes, and the crowd, other than the members of the media elites, loved it. Frankly, I loved it. This was history. This was America. This was an earthquake in American Politics and it was breathtaking, whether Gingrich is a huckabee or Abraham Lincoln incarnate.

Saturday was Primary day. History. But it was also the Hominy Grill for brunch and a chocolate pudding “to die for” (oh, I hope not). We also looked for presents for our wives. Every vacation has its moment of pain, I guess. We finally found the requisite baubles and headed back to the hotel for the results of the election. Ari and I knew Gingrich was going to smite the MITTEN Man. Romney had been pathetic and he had a Cayman problem, too. Rick Santorum seemed tired and Ron Paul was, well, Frank Perdue.

Gingrich won by 12 points. We had a creamy Key Lime pie with grahame cracker crust. Newt’s two daughters stood by their Dad. I believed that the Republicans had their MAN.

Sunday we watched football at the airport and sat next to a Tea Party regular who had come to Charleston from Austin, Texas, to follow the election. Nice man. I think he was ex-CIA. Also sat next to a beautiful young African American woman who did makeup for Fox TV. She had also been working the Primary.

America. Ain’t it wonderful? Another fork for the key lime pie, please.

Question: Would Newt’s record with women stop you from voting for him?