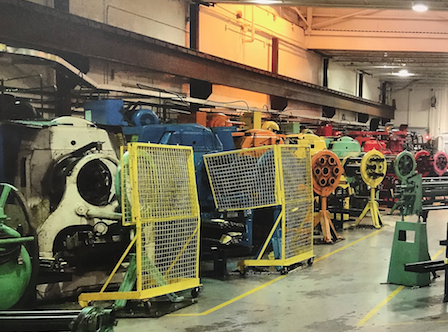 I often ask clients of our machine tool business where they make the most money in their businesses. They usually have an answer immediately, and it isn’t in the place where they are investing fresh money.

I’m frequently talking to folks who run multi-spindle automatic screw machines, usually cam-operated, in tandem with a host of other equipment. Many people regard these machines as antiques from the antediluvian epoch of manufacturing. These are machines that some folks say won World War II. For the uninitiated, that was the war in which we fought the Germans and Japanese, while the Russians were our allies. The world does have the ability to change.

The ironic answer I often get is that the multi-spindles make the most money, and the return on investment is off the charts because they were written off eons ago. But the secret sauce is the knowledge of where they fit in the picture. Banging out a half million dumb parts on old Acmes or New Britains is a losing game. Increasingly, sharp manufacturers in Shanghai or Bangalore will make you bang your brains out. Subsidized steel in China and dirt priced brass in India make the simple threaded widget yesterday’s game. But, combining the raw machining strength of 6- or 8-spindle multis with the

finesse of twin-turret, twin-spindle CNC turning centers can turn 20 cent blanks into $2 medical or aircraft pieces. Running single bars through an Okuma or Nakamura will make you a bit player in a crowded cast, but combining those machines with the muscular multis that still can pull their not-so-insignificant weight, makes a potent combination that Shanghai and Bangalore can’t beat.

President Trump’s tariffs are an annoyance which could grow into a blister if they do not bring any fundamental shifts from the Chinese. American manufacturers, particularly steel users, are today’s sacrificial lambs as the Administration vaguely pushes for China to stop stealing intellectual property. The naïveté of somehow expecting Beijing to allow one of its biggest employers, the inefficient State-run steel industry, to suddenly erode because of the tingling jab of American tariffs is quite surprising. I fret that the strong U.S. economy has made an overconfident Trump start a fight without a clear endgame.

My son Noah is getting married next month and already receiving some gifts. It brought to mind a few memorable gifts my wife Risa and I received for our wedding that have lasted over the decades we have been together.

We still use our copper bottomed Revere Ware skillets and sauce pans almost every day. Amazingly, 48 years later, they are better than when we got them from Shirley Silverstein as a gift, because they have been seasoned. We seldom shine the copper bottoms, however.

We still have aluminum baking pans, perfect for brownies and cakes, which have remained as wonderful as they were when we received them more than four decades ago. Then there is the cookie recipe book that Risa refers to often and the old Better Homes and Gardens recipe book that never seems to age.

The ideal present does not have to last for 40 or 50 years. Luggage can be used hard for 5 or 10 years and happily discarded, and a sweater that you wear often has a finite life. My wife and I have our own good china, but she usually uses her mother’s china for Sabbath meals and special occasions.

We have several weddings coming up besides Noah’s. The Amazon gift certificate is an appealing surrogate for the special wedding gift that will be remembered fondly 50 years from today. Gifts also go out of vogue. Silver serving bowls seem like such an anachronism today. Who has the space for them to sit idly on shelves?

With wedding season at its peak, I am curious to know who has gifts that have withstood the test of time. Who has a great idea for a gift that will keep on giving or impart a memory which will last forever?