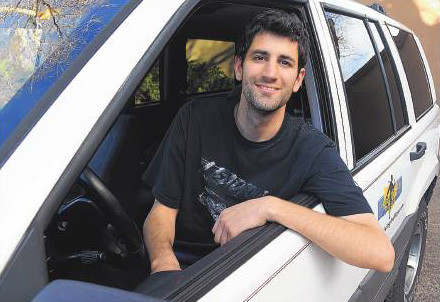 Daniel Seddiqui, a 27-year-old native of Northern California, completed a quest to work 50 different jobs in 50 states in 50 weeks. He worked as a lobster fisherman in Maine, surfing instructor in Hawaii, bartender on Bourbon Street, wildlife photographer in Alaska, and in a machine shop in Minnesota. He is currently on a lecture tour, writing a book and editing a documentary about his journey.

What gave you the idea to do this project?

DS: I graduated from college about four years ago with a degree in economics but couldn’t land a job in my chosen field. I failed 40 interviews. After three years of living in five states doing odd jobs from working at Bed Bath & Beyond to part-time accounting, I decided to embark on a journey to try out jobs stereotypical to each state, to see what America’s all about.

What were a few of your favorite jobs?

DS: I really liked bartending on Bourbon Street during Mardi Gras. I also liked being a dietician in Mississippi. Our country has an obesity issue. I was working in the fattest state in America, going to hospitals and nursing homes, working alongside a professional. I was changing people’s lives by educating them and motivating them to eat right and be active.

You worked in a machine shop?

DS: I was a machinist making medical equipment at Metal Craft in Elk River, Minnesota. A lot of the [machinists] had gone to technical schools and some were high school dropouts who knew they wanted to do this for the rest of their life. It was surprising—a lot of them had done it for 30 to 40 plus years. I guess once you do it, you want to stick with it. That’s kind of a rare thing nowadays.

What was the process like for finding these jobs?

DS: I set the jobs up as I went, but I had a month buffer zone. During my lunch breaks I would call another state [looking] for my next job. I would keep calling and calling and calling, using Google to search for these companies. I would try and sell myself and my idea. Sometimes I would say, “I’m very serious about your industry but there’s no way to know [if it’s right for me] unless I can try it out.” I would think outside the box. When I was [trying to be] a border patrol agent in Arizona they wouldn’t hire me, so I got press credentials and wrote for a local Tucson newspaper in order to walk alongside a border patrol agent.

Did you get rejected a lot?

DS: I estimate about 5,000 rejections, about 100 per week. But 90 to 95 percent of the time [the employers that did hire me] asked me to stay. After they handed me a paycheck, they said, “If you want to come back after your mission, we would love to have you.”

What did you learn on your journey?

Do you think this project has had a positive impact on other people?

DS: Yes. I’ve helped a lot of people along the way. For example, I was working as a boilermaker, and there was a dentist who was out of work for three years. He saw me on the local news in Kansas City, Missouri, and said, “Wow, this guy is going around doing everything, showing that he’s an asset to these companies. I have welding skills, why don’t I go and apply for a job there tomorrow?” He showed up at the company and got hired on the spot. Rather than sitting idle, he’s doing something and making money.

Originally printed in the Nov 2009 edition of Today’s Machining World.