One on One: Eric Golden, President and CEO of Equipois 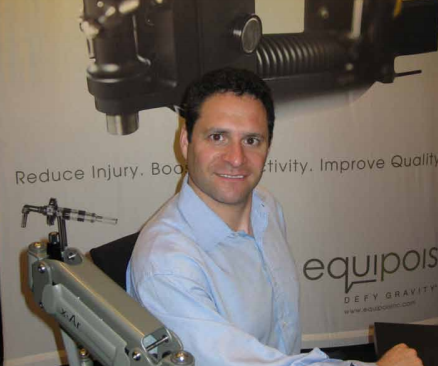 Eric Golden, is President and CEO of Equipois® Inc., a company specializing in creating products that increase worker productivity by reducing fatigue on the body. In March 2011, the company released the x-Ar™, an exoskeletal arm that attaches to the arm of the user giving them the ability to hold and maneuver objects as though they are weightless.

Tell me the story of the x-Ar™.
EG: The x-Ar™ is an exoskeletal arm support. It attaches to your arm and supports your arm’s weight so you can work with it outstretched without bearing the weight of your arm. It’s a decedent of our zeroG® technology, which has been around for a number of years. zeroG® technology holds tools and parts and let’s workers move them as if they were weightless. The zeroG® technology has been used by many major manufacturers in aerospace, automotive, machinery, assembly and metalworking.

Who invented zeroG® technology?
EG: It’s actually a decedent of the Steadicam™, which allows a camera operator wearing a vest to hold the camera so the camera seems to float. We worked with Steadicam™ inventor Garrett Brown to adapt that technology and evolve it for use in the workplace.

How is the x-Ar™ different from the zeroG®?
EG: The x-Ar™ attaches to the arm itself so you continue to use your hands normally. The exoskeleton is just helping you out, making you have more strength and stamina than you would alone. [It’s helpful] if you’re working with with very small tools or just for activities that require you to work with your arms outstretched. It could be used for something as simple as operating a computer keypad, if you have to do it in a position where your arms are outstretched. Or it could be used with drills, finishing equipment, welding, soldering—any activity where you can picture somebody needing to have their arms outstretched all day long.