An Interview with Jake Nickell from Threadless 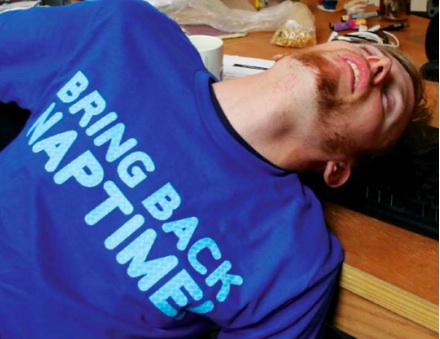 Jake Nickell and his partner Jacob DeHart started Threadless, a T-shirt brand which exclusively prints designs submitted by amateur illustrators in weekly contests on the internet. Threadless is a division of skinnyCorp, an Internet community Web site owned by Nickell and DeHart. In 2005, skinnyCorp had $6.2 million in [sales], all on the Web.

NG: What did you do before you started Threadless?

JN: I was 20 years old, working full-time at a web development company and started Threadless on the side. After two years I started doing it full-time.

NG: Did you have any kind of business background when you began?

JN: No, my background was more in web development and design. But I wasn’t even intending to start a business when I started Threadless. It was more just a hobby, something I was doing for fun.

NG: What inspired you to start it?

JN: Jacob and I were both members of an art community called Dreamless, which held a T-shirt design contest that we both won. Jacob and I started talking about how cool it was to have won the competition and came up with the idea for Threadless, an ongoing competition where people could always be submitting illustration work.

NG: Who votes for the designs in the contests? Do you ever pick shirts that don’t sell?

JN: Anybody can just sign up [on the internet] and vote. When the voting is completed, we look at the top 100 scoring designs and then pick 20 to 30 from that list. Everything sells within around three months.

NG: How long does it take from when the design wins to being ready for sale on the Internet?

JN: It’s not a set number, but we’ve done it in as fast as three days.

NG: So what exactly is your business? T-shirts? Or social networking – with services like skinnyCorp’s podcasts and blogs and message boards?

JN: It’s more about building communities within spaces that we’re interested in. Most of the projects we create, we just thought would be cool. We’ve got probably seven projects and four of them don’t even have a revenue stream.

NG: Have you thought about having Target or other retailers distribute your T-shirts?

JN: Target came to us, and so did Urban Outfitters and some other big name stores. It’s never really interested us because you can’t tell the story in a department store. [The story] is kind of the main reason people buy the shirts – the fact that [the design] was submitted by a 14-year-old in Japan who’s really into art right now, and she won a competition. You lose that process in a department store.

NG: Do you have plans to take a couple of the really popular shirts and start mass producing those?

JN: We don’t plan to keep anything consistently in stock.

JN: It’s the whole limited edition thing. It’s a huge portion of what the product is. We’d rather print a new design than reprint an old one. It’s about keeping stuff fresh.