One on One – Tattoo Artist Ron Dolecek 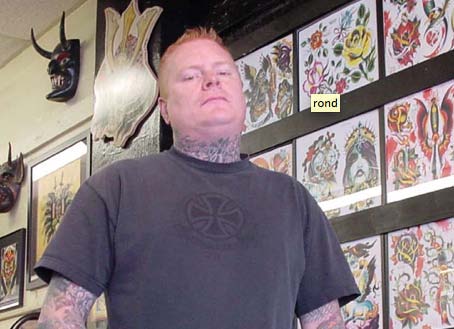 Ron Dolecek owns and operates Lucky Devil Tattoo in Wichita, Kansas. He’s been creating body art since 1988, and for four years has built his own tattoo machines.

What was your training to become a tattoo artist?
RD: In 1988, there really was no such thing. In the town where I lived there was one crusty tattooer who wanted nothing to do with me, so I was pretty much left to my own vices. Through some misguided attempts on my friends, I eventually became self-taught and found my way to my own tattoo shop. Nowadays there’s an official apprenticeship program. That’s the common accepted way, and really the only way in.

What goes into building a tattoo machine?
RD: The tattoo machine was patented in 1891 by Sam O’Reilly. He adapted a design from Thomas Edison for an electronic perforating machine. Basically the machine hasn’t changed in a hundred years. It’s a simple device made up of two electromagnetic coils, which basically drive a spring mounted armature bar up and down to drive the needle. That’s the oversimplified version.

Why build your own?
RD: When I first started tattooing, there were few people who offered tattoo machines and there were very few manufacturers and suppliers. Nowadays, there are hundreds of suppliers. You’re bombarded with everything from $12 cheap Chinese knockoff crap to $500 to $1,000 handmade instruments that are not only tools of the trade, but often times collectible pieces of art. What led me to it was that I had tattooed for nearly 15 years without understanding the device I was using. I felt like a fraud and decided I needed to know more, so I began asking questions. I got a few breaks from a guy that was building before me. Once I understood the machine and was able to build it, my work changed forever.

How did it change your work?
RD: A well-tuned machine will put pigment in the skin while causing the least amount of trauma, which provides a quick healing tattoo, and ultimately a very bright tattoo. A machine that isn’t well tuned will still put ink in the skin, but causes unnecessary trauma, which leads to slow healing, scabbing, pealing and color loss.

Tell me about tattoo removal. What goes into that?
RD: That technology is really starting to come into its own. Even though I am a tattooer, I think it’s a good thing. Basically what you have are a couple different frequencies of laser light. There’s one known as Q-switched and one known as Yag. Between the two frequencies you can remove almost all colors of pigment—blue and white are among the most difficult and black is by far the easiest. What happens is the laser light penetrates the skin and the energy is absorbed by the ink particle, which then breaks the ink particle into smaller pieces. The body’s lymph system carries that pigment away and it’s deposited in the liver. The process of removal is a little like getting splattered with hot bacon grease, it’s not pleasant.

What do you think of the proliferation of tattoos on athletes?
RD: It’s funny, because like Hollywood stars, they have the worst quality tattooing. You’d think that they would seek out the best, but they don’t. I’ve seen portraits that are absolute failures. I think that’s what is driving young people to get all this awful lettering and [garbage] all over themselves. Tattooing has gone through a transformation—when I started in 1988, nobody was tattooed, at least nobody cool. Instead of getting tattooed to set you apart from a crowd as an individual, tattooing is now being used as a way to join the crowd.

I’m sure it’s good for business, but it changes the meaning.
RD: You’re absolutely right. If I had gotten into tattooing for business, I would be happy as could be. But I got into tattooing because I was born with the ability to draw things, and I figured out a job that would allow me to use that ability and make money at it. Basically what’s happened is that you have to be a businessman [to succeed]. You have to throw art out the window and make money to make that mortgage—not the ideal situation.

Find out more about tattoo artist Ron Dolecek and his tattoo machines at www.luckydeviltattoo.com.