One on One with Hubble Telescope Astronaut Mike Good 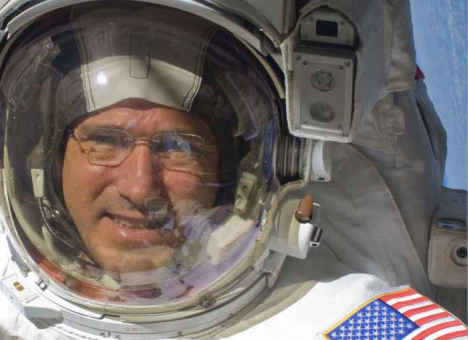 Astronaut Mike Good was a mission specialist on the fifth and final space shuttle servicing mission for the Hubble Telescope May 11-24, 2009. He and his crewmates from the STS-125 Atlantis Shuttle refurbished the telescope, which now has four new or rejuvenated scientific instruments, batteries, gyroscopes, outer blankets, and a new computer.

Mike, what did your job entail as a mission specialist servicing the Hubble Telescope?
MG: I had flight engineer duties on the flight deck and did spacewalks. I was basically like a repairman or a construction worker. You’ve got power tools and you’re out in the vacuum of space floating around the outside of the ship.

How were you able to work on the telescope floating in space?
MG: We grabbed the telescope and brought it into the shuttle’s payload bay, which became our garage. Then we’d go out into the “garage” in our spacesuits and crawl inside the telescope, which was about the size of a bus. We would pull out and replace boxes and sometimes actually repair some of the scientific instruments inside, like the cameras that take all those cool pictures and the spectrographs that do scientific measurements. One of the advantages of being in space is that everything is weightless, so you can handle 800 pound cameras with one hand, floating them in and out so you can tighten up the bolts.

Do you think it would be easy to do car maintenance space? You could pick up the car yourself to change the oil.
MG: Yeah, and you could just drop an engine in. But how would you empty the oil? You count on gravity for a lot of things. If you drop something in space, it doesn’t just end up on the garage floor. It might float away on you. Obviously you have to be tethered to everything. When you’re using power tools, if you put your tool on a bolt and squeeze the trigger while untethered, you will fly around in circles.

Tell me about the robotic arms used in space?
MG: A robotic arm is attached to the space shuttle that we can use in the payload bay. It’s operated from inside the shuttle, and we can actually put one of the spacewalkers on the arm. There’s a foot plate on it and you wear boots similar to ski boots so you can snap your feet into it. I was the guy outside on the arm.

Do the extreme temperatures in space make your work more difficult?
MG: The environment is very harsh. In the vacuum of space, there are extreme temperature differences. Depending on if you’re in the sun or not, it can go plus or minus 200 degrees. You’re going around the earth once every 90 minutes, so there’s a sunrise and a sunset every 90 minutes, meaning you’re in and out of the sun and darkness a lot. Things expand and contract depending on whether they’re hot or cold, and a lot of times parts have tight tolerances you have to deal with.

When you’re in space for a long period of time, what does it do to you physically?
MG: Being up there is great, but coming back is hard. As you get back into gravity, everything’s heavy and it takes a little while to get used to 1G again. If you’re up there for long enough, your bone density and muscle mass deteriorates. Your bones pretty quickly realize that they aren’t needed to support you, so they just start deteriorating

What is one of the coolest things for you about going into space?
MG: The coolest thing for me is being able to go outside on a spacewalk. To put on that suit and go outside with just the visor on your helmet to look through. There’s nothing between you and the earth 300 miles away, and it’s going by at 5 miles a second below you. It’s just a cool feeling to be able to be out there working in space. Once you’ve flown and you’ve had that experience, it’s hard to look at the earth or the universe in the same way.