Shop Doc – Flaking in the Threads with Brass Parts 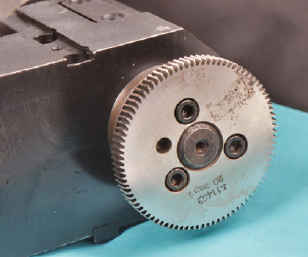 Our client needs a thin walled brass part. My screw machine is a 1” 6-spindle Wickman. We were concerned about flaking in the threads with brass parts so I knew I had to come up with a cut thread. Our two options were thread milling and thread chasing. We couldn’t get the brass to gauge on our Johnson Gauges because of the flaking. I tried running a drill inside the part while I was thread rolling to avoid crushing of the part but it still didn’t gauge. I tried putting a thread chasing die on the machine and saw that the lead on the threads (or the pitch) was off. We had tracking problems. The thread die is 400 thousandths wide. It wasn’t tracking properly as it ran across the part.

On a 1” Wickman, on the center drive shaft where the spindle speed gears are mounted, there is a coupling between the back half of the drive shaft and the front of the drive shaft. As the machines get old, and typically because people run hex material on these machines, they start to pound out the spline on the shaft and the coupling gets loose. This creates looseness or play in the machine, which I call “slopposis.” Toward the spindle end of the machine there is a drive key that engages the main spindle drive gear. That key can get pounded out and you get slopposis at that point. On each spindle there is a drive gear that engages the center drive gear. If the keyway on the spindle is pounded out that is another source of slopposis.

The attachments do wear out, but that is probably not the case with yours because your attachment was rebuilt by a reputable source. However often people will put the thread chasing cam on the attachment and forget to put the spacer washers on. This would result in the cam flopping back and forth, which will throw the lead off.

Al Seniw of New Lenox Machine Co., Inc. in Dwight IL. Al has been working on Wickmans for forty years and he has taught machining courses at community colleges.