The $64 billion dollar question for the economy is, what happens to employment? What happens to unemployment is related, but the two numbers do not always shift in tandem.

We are seeing a strengthening in manufacturing now and the overtime strategy seems to be waning. Productivity stats are still impressively bullish but they are starting to level off. You can only squeeze so much juice out of the lemon. The Labor Department acknowledges that people are being hired in manufacturing and my anecdotal evidence confirms this.

New construction is still pathetically soft in most markets, but we are seeing a weird anomaly in the most devastated markets of Nevada, Arizona and Florida. Builders are starting to build houses. According to an article in last Saturday’s New York Times, the most devastated housing markets are starting to get hot. It appears that some buyers just want a new home and hungry builders with low cost lots are providing value. Buying out of foreclosure or employing a short sale is such a hassle it is pushing buyers to brand new. According to the article, individual buyers are losing out to out of state buying syndicates who are picking up large collections of foreclosures at cheap prices and paying cash. Perhaps the dreaded foreclosure overhang will prove to be similar to a mild flue season, which bodes well for employment—but not necessarily unemployment.

Juan Williams, the astute Fox and NPR commentator recently did an interesting piece on the composition of today’s long term unemployed. The stubborn unemployment is in older white, blue-collar workers. He compares this demographic slice with black factory workers laid off in the early 1980s downturn. That group was very slow to get new work, saw families dissolve and higher levels of drug abuse and births out of wedlock. According to Williams, we are seeing similar trends now from the blue-collar white male demographic.

When I talk to people in the machining world I often hear confirmation of this employment issue. Company owners do not necessarily want to retrace their steps on new hiring. They may be looking for difference skills and younger workers who are willing to start at a cheaper wage and be less insistent on health insurance. Immigrant works with a strong work ethic may look more appealing than a 50-year-old former union guy who has been out of work for nine months.

I think the recovery of 2010 will be a little different than past rebounds. Companies will be hiring, but not necessarily rehiring. Unemployment will be sticky, but millions of people will be finding jobs.

Question: Is it a mistake to lengthen the eligibility period for unemployment benefits? 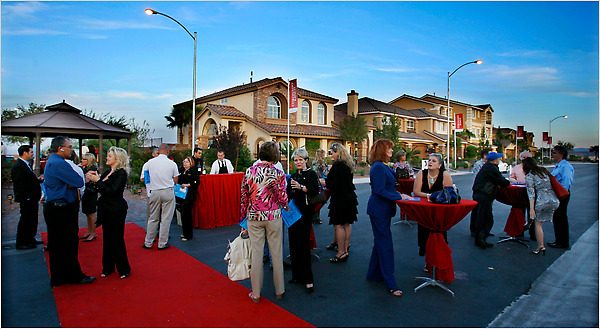 A party for a new development in Las Vegas, Reserve at Coronado Ranch (New York Times)