My Apple Tree of Life 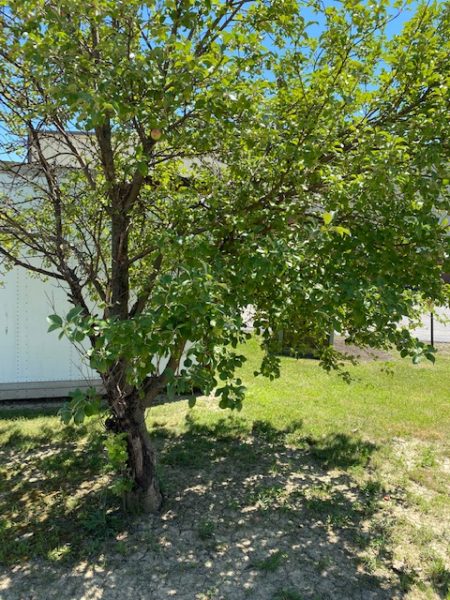 When I was a young man and we moved into our new warehouse in Oak Forest, IL, one of the first things I did was plant an apple tree.

The soil next to the building had been scraped off to accommodate our parking lot, but I planted it anyway. I love apples, and I wanted to watch the tree grow and bear fruit, along with the business it was close to.

This was almost 40 years ago. I was no farmer. I only planted one tree, and I expected it to magically bear fruit. But it was moribund. It had no other trees to pollinate with.

About 15 years ago, we planted two more apple trees on the other side of the building. I assumed the apple tree I viewed out of my window every day was barren even though it had grown to be 25 feet high and was leafy and even had a few blossoms in June every year. But never an apple.

Then the tree got very sick. Almost one-third of it died. But it survived in a truncated version, lush and green every year growing alongside its ugly brown branches.

About four years ago, we got a few apples almost out of nowhere. Then a few more the following season. We started spraying it in the early spring to ward off the pests. Last year was very cold in the late spring, and the crop was meager. But this year, the tree, in its 40th season, has had a sensational crop of young apples growing robustly.

I visit the tree every day I am at the building. Just looking at it thrills me and revitalizes my spirits. I think of my mother, Thais Graff, who cherished her two apple trees and flowering crabapple, and made the most wonderful apple pies in the world. And her apple turnovers made with leftover apples were to die for.

The books say 35 to 40 years is the lifespan of an apple tree. But my tree seems like a youngster having found new life after almost dying. I think 2022 will be its biggest crop by far.

I am hoping this year Noah and his wife Stephanie will join Risa and I to make applesauce from the Graff-Pinkert apples. Last year, we made two big pots of sauce from an assortment of apples grown at the farm of my apple merchant who comes to the weekly Farmers Market I go to Frankfort, Illinois. He fills two half bushels, and his son brings them to the trunk of my car.

He says that this year’s crop will be the best since 2018 because of favorable growing conditions. Last year, he was so discouraged by the bad weather he told me he was thinking of cutting down his trees and building homes on the property. Thankfully he didn’t.

My apple tree is symbolic for me. It is my tree of life.

It depends on other apple trees and bees to pollinate and bear fruit, as I rely on my family, friends, and business associates to live a full and productive life. It should be retiring from the fruit bearing business like people say I should be doing at my age, but it is flourishing like never before.

My tree is more than a beautiful leafy piece of nature. It is an inspiration. It is a gift.

What is your favorite apple variety?

What is your favorite pie?