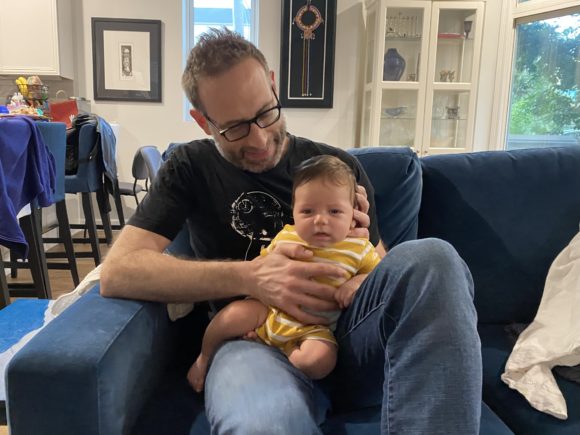 This Sunday will be my first Father’s Day—the first one in which I am a father myself, which I have only been for about two and a half months.

Sometimes when I look at my infant son Abe it makes me marvel how I get to work alongside my dad in two businesses. It’s mind boggling to imagine Abe as an older kid or young adult who I could engage as an intellectual equal.

Child rearing has made me reflect on some of the similarities I share with my dad. Growing up, my dad’s go-to song to calm us and put us to sleep was “Goodnight Irene” by the Weavers. Soon after Abe was born, in a desperate effort to get him to sleep one night, we played the song on my iPhone. When he heard the violin intro and went silent, we realized we had uncovered an invaluable means to sooth him. Now, we play the song so often I think Stephanie and I know the words better than my dad. I look forward to singing it to Abe alongside him one day soon.

I often listen to a lot of self-help and business podcasts. When my dad was in his 40s, in the car he constantly subjected us to the predecessor of self-help podcasts, Tony Robins audio cassette tapes.

Growing up with learning disabilities, I used to dictate compositions for school to both my parents, which I think really nurtured my writing standards. My parents didn’t over-help me. They used the opportunity to collaborate with me, to push me to come up with creative ideas of substance. Nowadays, I’m the one who fixes the great Lloyd Graff’s punctuation, and I get great satisfaction helping him come up with ideas.

We like to critique each other’s work, both in the machinery business and producing Today’s Machining World, though I admit it seems like these days, I’m often the more critical one between us. He usually likes when I push him, at least he says he does. I ask him things like “do you really want to bring up race relations in the last paragraph of a blog about a steel company?” I often question him about why we priced a machine a certain way when the number seemed so arbitrary. Sometimes I ask him if he’s sure he wants to invest significant money in oily crusty screw machines that are almost as old as him.

My dad is by far the oldest person at Graff-Pinkert, but he usually has the most balls when speccing on machines. He’s the one pushing to bid tens of thousands of dollars for CNC machines at auctions that we have only seen a few photos of online. Sometimes he wants to pay significant money for types of machines we have no experience with. He believes that buying them is often the best way to learn about them. I also love his confidence to be a contrarian in deals. I think he gets extra pleasure buying machines that others have shied away from, as long he has a good feeling in his gut. His chutzpa definitely makes the work more fun.

Whenever I present my dad with a business tip I’ve read, or a negotiation tactic I’ve been practicing, or an esoteric creative project I’m working on, he always shows me respect and wants to understand what I’m talking about. Often he buys into the ideas, sometimes he actually tries them.

One of the things I love the most about our relationship is that we aren’t afraid to openly tell each other how grateful we are for the privilege to work together. We both know that life is too short to hold back from telling the people most important to us that we enjoy being with them and respect them.

Abe is becoming more precocious and interesting every day. Maybe one day we will get to work together, but even if we don’t, I would be blessed if our relationship has the same respect and pleasure as that of mine and his grandfather.

Question: What is the most important thing you learned from your father?