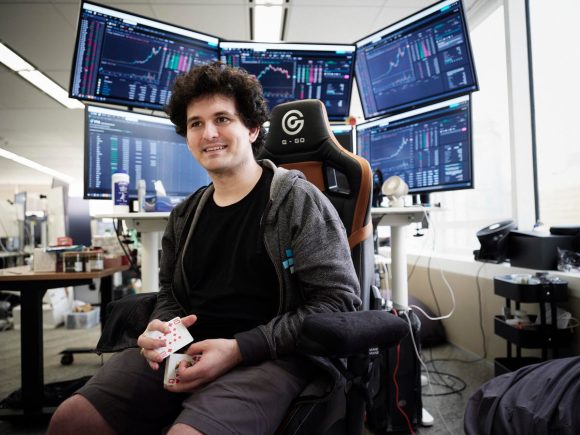 Why does a kid living in shorts and a t-shirt in the Bahamas attract multi-billions of dollars to invest in cryptocurrency, while the machining world is auctioning off Haases and Davenports because they can’t find enough people to run them?

The Sam Bankman-Fried story fascinates me, perhaps because it is so different from the world of machining parts and trading in 40-year-old screw machines.

I know those of you who choose to read my blog today will probably think I flew off my Y-axis by writing about the flame out of the cryptocurrency boy genius, Sam Bankman-Fried, but I think his story is more relevant to the machining world than you might think.

Sam is 30 years old. A month ago, he had a net worth of maybe $10 billion. Today that is zero except for what he may have hidden in his Steph Curry shoe boxes. Steph and Tom Brady were two of his investors.

His parents are both Stanford Law professors, and his dad has written several books about taxation. Sam went to an elite private school in the San Francisco area. He was evidently enough of a math whiz to get into MIT and graduate despite a passion for video games.

Sam is of Jewish descent, but he was raised as Utilitarian, which stands for the tenants of providing the greatest good for the greatest number of people. Several of his father’s publications discuss the intricacies of tax shelters, and his mother is very active in Democratic Party politics.

Sam has followed his mother, giving $30 million to Democratic Party candidates in the midterm elections. One of his biggest beneficiaries was Maxine Waters of Los Angeles, who also headed the House committee charged with investigating securities fraud, including cryptocurrency.

After Sam left MIT, he went to work for a Wall Street investment firm. After a few years there, he set up his own firm and moved to Nassau, which has favorable tax laws and no extradition agreement with the United States.

He had grandiose plans to set up a company that would become the leader in trading cryptocurrencies like Bitcoin but also lesser known currencies trying to make it in the wild and wooly crypto world. He convinced the prominent venture capital firm, Sequoia Capital, to invest in his startup cryptocurrency exchange, FTX.

He lived and worked in his luxurious Nassau headquarters and attracted a group of young people who liked his style and the promise of riches if he could keep all his balls up in the air.

The whole enterprise ultimately crashed this month when it was revealed that Sam’s separate personal company called Alameda Research, which was part venture capitalist, stock trader, and currency better, blew billions of dollars that had been borrowed from FTX.

Was it a Ponzi scheme? I don’t know. Is he a crazy kid who is both brilliant and stupid? Will he go to jail? His fancy New York law firm just dropped him because they found his incessant tweeting and texts more than they could deal with.

Does the SBF fiasco make me pessimistic as we move toward Thanksgiving 2022?

Three of my grandchildren are growing up a couple miles away from where Sam grew up. Their passion is musical theater, and they have built a troop of like-minded kids to act in their plays. They rehearse several hours each day and still get their homework done, and do part of the cooking. They refuse to look at TikTok.

At Graff-Pinkert, we have seen more startup machining companies lately than any other time in the last 20 years. Machining work is leaving China and looking for reliable sources in America. My children are working with coaches to improve themselves and writing in gratitude journals each day.

American politics is very messy, but it is constantly changing and turning over. All across the country, people will come together this week looking to connect over turkey and sweet potatoes. I can only hope Sam’s parents will help him pull his life together as the world laughs at his excesses and his tweets.

What are you most thankful for this year?

Would you invite Sam Bankman-Fried to Thanksgiving dinner?