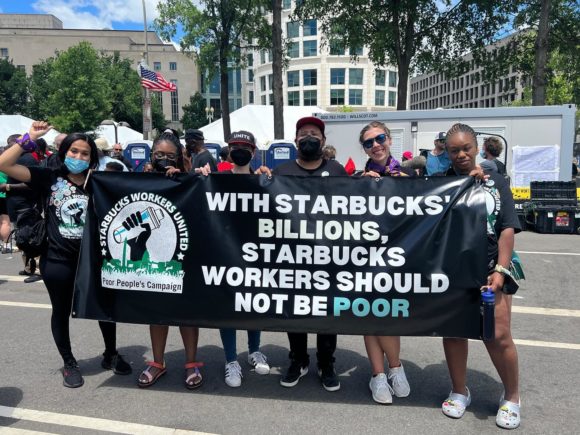 The New Union Movement is sweeping the country.

At least you would think so reading or listening to the popular media.

Some Starbucks stores have voted to unionize, and an Amazon fulfillment center on Long Island has voted to organize too, but to me the shocking fact is how few of America’s massive corporations, which have grown hugely over the last 30 years, have seen unions take root.

I have been trying to figure out why the union movement has been so unsuccessful in recent years except in organizing school districts and government workers. Perhaps one of the main reasons for their failure is the visibility of the results produced by unionized schools and municipal governments. Public schools are generally in disrepute in this country, and enrollments are dropping in many locations. Governments are viewed as bloated and ineffective, at least in the larger more visible units.

Meanwhile, Amazon, Starbucks, and most of Silicon Valley has grown and grown without unions gaining a foothold. Industrial companies have fled to Asia or Mexico, where there are no unions, and to the American South, where the union movement is viewed suspiciously. Even the auto industry, which is a long time bastion of unionization, has grown in this country almost completely free of unions for the last 25 years.

One could argue that the laws make it hard to organize or that the massive power of big firms have held their collective thumb over fledgling union efforts, but unions in the United States have generally had governments which have been sympathetic and have big potential financial support if they can get a footing.

Why can’t the new union movement take hold, particularly in a period of labor shortages and companies frantically attempting to hire even people with poor work records or former prisoners? This should be a fertile time for organizing. Handling packages at Amazon is demanding and leads to many hand injuries, yet Amazon has used high hourly wages, health insurance plans, and education incentives to enable it to keep hiring without unionization.

America’s expensive colleges have also made Amazon and Starbucks viable part-time alternatives for many young people. Firms like Amazon, Starbucks, and Walmart navigate their hiring needs by limiting the number of full-time employees. Workers who are busy with school, childcare, and second jobs, do not view these temporary jobs as careers, and union dues for short-term employment makes unionizing much less attractive. Part time work with higher hourly wages is viewed as a better alternative to a pension and 30 years at the same job.

Companies have also been shrewd in showing a much less adversarial stance than in the past, when the boss was usually seen as a hated tyrant.

But have we reached a new tipping point where homegrown unions with financial backing finally begin to gain ground? It is certainly possible with jobs available all over. China is less appealing for big firms today. Mexico has personal safety and language barriers.

Will we see a unionized Amazon or Google or Starbucks in a few years? What do you think? Do you find union jobs appealing? Will small businesses be forced to unionize in order to hire? Or, will the percentage of union workers, even with laws slanted in their favor, strengthen over time?

Question: What would entice you to join a union?