The mavens and savants are struggling with lots of economic numbers coming in that do not conform to popular wisdom.

We have a very tight labor market right now, but the wage increases are merely bubbling up at a 2% per year pace.

I have to admit this number does surprise me because Amazon just raised everybody at least a buck an hour, and the minimum wage law, which used to be an issue for the angry liberals, is now a forgotten artifact in a competitive economy.

People in the food-serving business do have to pay more or they will have nobody to flip the burgers, but in the industrial economy I have been surprised that the wage push appears to be subdued.  People are just getting by with fewer people than they used to, because hiring is so difficult.  A lot of people who are joining the production workforce are fresh faces at lower wages than the retirees who are exiting.

Investment by middle-sized business is softer than one would expect with 3-4% GDP growth in the economy.

Bigger companies, particularly a lot of foreign firms, are investing major money in factories, equipment and training but not small and mid-sized firms.  For independent business people the scars of 2008-2009 are still palpable.  I think many older business folks are still in a “recovery” state and very cautious about acquiring debt to expand.  Also, the tax law favors Type “C” corporations over “S” corporations which are common for small businesses.

Big companies, whose managers are mandated to grow their companies without having to spend their own cash, are putting up new factories and buying others.  Small and midsize firms find it harder to borrow and are inclined toward conservatism.

For those wanting to sell out, they need to build “EBITDA” to command a decent price, and often the willing buyers are private equity firms that want to milk the acquisitions to quickly pay down debt then flip them to the next willing group. 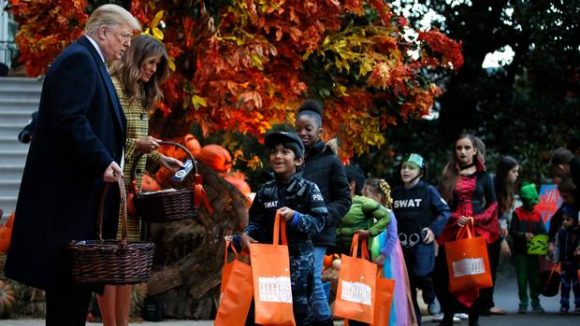 Donald and Melania Giving Candy to Trick-or-Treaters at the White House.

The stock market is sliding down.  This should not be terribly baffling after nine years of buoyancy.  When the Dow was over 26,000 I found myself checking my retirement account every day.  For me this was a sure sign that we were headed for a plunge.

Looking at it coldly, the Fed has been whacking the market incessantly with rate raises.  The short-term rates go directly at my lending line, making me wince quarterly.  Interestingly, the 10-year bond which dictates mortgage rates has been relatively kind to us because zillions have poured into that bond from around the world.  Nevertheless, mortgage rates have moved up faster than the 10-year has, and the new and used home markets are sluggish.  I think that many people, correctly or not, view the home market to be out of reach for what they want and expect.  One significant reason for this is the choice by many owners to rent their homes by the day, the month or the year because CD rates are paltry and demand for rental housing is robust.  The amount of owner-occupied housing is falling in America, a phenomenon few predicted 5 or 10 years ago.

We are in a period when automotive is stagnant, housing is mediocre, rates are rising, wage growth is modest, stocks are falling, yet small business confidence is at record levels and much of the Press says America is a mess.  Pretty weird.

I’ll take another shot at explaining what is going on.

The U.S. economy is running on borrowed money.  The tax cut made for bigger deficits, but the happy fact is that all the borrowing is well within our means – if the economy keeps growing and folks are confident.

The big jump in military spending has given us more extra juice.  Will the glee over defense splurging go on forever?  Doubtful, but for now it is a plus.

Business owners, especially small business owners, like Donald Trump, tax cuts and lighter regulation.  The New York Times and CNN hate this fact, but it is true for now.  I think the stock market drop is a hedge by Wall Street against a Democratic victory in the midterms.  If the Republicans get to 55-45 in the Senate I think we’ll quickly see stocks jump 5-10%.

If you’ve read this far you have absorbed 600 words of Lloyd Graff’s opinions.  Do you agree?  Are you confident or pessimistic?  Are you making more money and saving it or buying a new F-150?  Have the higher interest rates soured you or do you ignore them?  Sock it to me.

Question: Is your confidence in the U.S. economy rising or falling?