Today’s podcast is part 1 of a two part interview with Alec Mandis, Chief Executive of Accord Precision, the largest machined component manufacturer in New Zealand. Accord exports precision products around the world, with 30% going to the United States. Alec described to us what it’s like to run a machine shop in a country of 5 million people, more associated with rugby and sheep than manufacturing. After the interview we started scheming how we could get down there for a sales call.

(3:40) Alec gives the history of Accord Precision. The company has around 50 employees. It is based in Auckland, New Zealand, and was started 45 years ago. It is one of the largest machine shops in the country.

(4:10) Alec estimates there are 30 to 40 machine shops in New Zealand, which he says is quite a lot when you consider the country has a population around 5 million people.

(4:45) Alec describes types of products Accord Precision makes. The company produces a wide range of part sizes from a variety of materials including various steels, aluminum, bronze, stainless steel, brass, composites, and plastics. The company has been transitioning over time from automatic screw machines to 4-axis and 5-axis CNC lathes.

(6:35) Alec gives an overview of New Zealand. He says that in recent years New Zealand has become more known around the world. The country’s landscape varies throughout the island. He says a person could ski in the mountains and surf on the ocean in the same day. The country receives 20 million tourists per year. 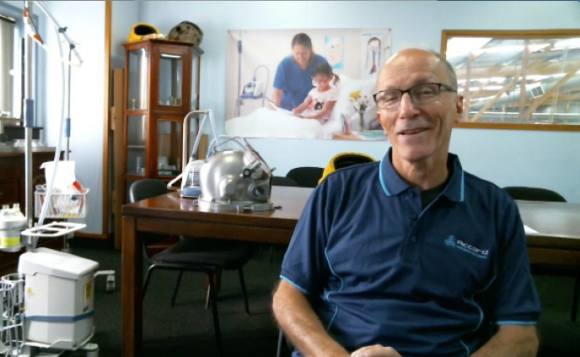 (8:45) Alec discusses New Zealand’s indigenous Māori population and the diverse immigrants in the country from all over the world. He says his shop’s workforce reflects this, with people from South Africa, Europe and Pacific Islands.

(15:45) Alec talks about the Accord’s progression to CNC machining.

(17:15) Alec says that the cost of skilled labor in New Zealand is similar to that in the U.S.

(18:10) Alec says that Accord is able to export to the United States because of its various ISO certifications and it is FDA registered in the U.S. so it can make compliant products for medical companies.

(19:40) Alec talks about the Accord’s origins. Its original business was supplying components to the appliance industry. Later the company diversified, making faucets, and products for the electrical, marine, and medical sectors.

(20:00) Alec talks about growing up in Rhodesia (Zimbabwe). He started a family in South Africa and eventually emmigrated to New Zealand.

(24:25) Alec talks about Accord Precision’s preference for Haas equipment. He said that Haas is the only major CNC machine tool builder that has opened a spares and service center in New Zealand, and it is only a 10 hour flight from New Zealand to Los Angeles. He says that Haas machines may be slightly lesser in quality than DMG or Mazak, but Accord has been able to machine excellent complex components using them.

Question: Are you a fan of Haas machines?

2 thoughts on “Ep. 59 – Alec Mandis on Machining in New Zealand”