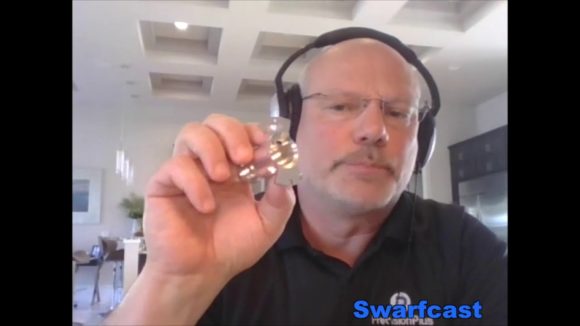 Today’s podcast is the fourth episode of our season interviewing people involved in CNC Swiss machining.

Our guest is Mike Reader, owner and president of Precision Plus, a CNC turning company in Elkhorn, Wisconsin. Mike came into the machining business at 31 years old following a career in the fast paced finance industry. When he first arrived, the company was using old school Tornos cam Swiss machines and running a lot of commodity-type parts. Over the years Mike has built a world-class machining company, diversifying the company’s product lines with the help of newer technology. All the while, his original cam Swiss machines still keep spitting out parts.

Mike gives an overview of Precision Plus. The company has 30 CNC Swiss machines, 40 older Tornos Cam Swiss machines, and some Miyano CNC lathes (single, double and triple turret). Mike says he has diversified the company’s clientele over the years. Precision Plus focuses on medical/dental, aerospace, and a variety of products in the industrial sectors. He says he has purposefully stayed away from doing automotive work because in his past experiences those clients were not looking for “a win for both sides.” (3:15)

Mike talks about being interested mechanical stuff when he was growing up in Delavan, Wisconsin. He says he was always the kid in the garage trying to make the go-cart go faster—the adrenaline guy. In high school he did well in technical classes as well as the standard curriculum. (4:45)

With encouragement from his guidance counselors he went to University of Wisconsin, Madison, where he majored in Economics with an emphasis in finance. After graduating he went to Chicago to get into the commodity futures world, starting out as a runner at the Mercantile Exchange and Chicago Board of Trade. Eventually he moved up to working in clearing operations and then got a job at Bank of America running their clearing operations. He says that world was intense and competitive—a lot of “work hard play hard” 80-hour weeks. (6:00)

Mike talks about using the Predictive Index Personality Assessment to organize his workforce at Precision Plus. He gives the assessment to employees in order find the correct spot to put people in to be successful. He also talks about the importance of pushing his people on the shop floor to keep stretching themselves. He likes to make his people strive to figure out how to do things better, faster, and smarter. He says if he ever gets to a point when he is no longer doing that, it will mean the business is in decline. (8:00)

Mike says when he first started managing he wanted to hire people who reminded him of himself. He says we all think instinctively that others should think the same way we do, but he learned from the Predictive Index tool that people don’t all think the same and they don’t all hear the same. His says the first time he looked for employees his instinct was to look for the pedigree of the “best and the brightest,” but that was difficult because college graduates often don’t want to start their careers working in Elkhorn, Wisconsin. They want to go off and see the world like he did. Later, Mike changed his criteria for new employees. He started looking for smart, driven people who wanted to get to work right out of high school, in addition to graduates of technical colleges and 4-year universities. (9:50)

Mike says Precision Plus often likes employees who are trained in-house, so they learn to to things the way company prefers. It also helps create a good company culture. (11:15)

Mike tells the story of moving his family to London to work for Bank of America and then coming back home to Wisconsin only 10 months later when his mother was diagnosed with cancer. His father had bought Precision Plus only seven years before but had to go care for Mike’s mom. All of a sudden at 31 years old Mike was thrust into running a machine shop, which at the time was still pretty rough around the edges. It was a dark oily screw machine house in 1995—no CNC lathes, only Tornos mechanical Swiss machines and secondary equipment. (12:15)

Mike says when he first got started at Precision Plus he looked at the customer portfolio and could see that the company had a lot of opportunities to grow. At the time the company was doing a lot of brass connector pins on Tornos cam Swiss machines. (15:40)

Mike says that he really enjoyed working in the commodity futures arena in the first chapter of his life. He says the last 25 years in manufacturing have been meaningful for him. He talks about how in the early 2000s a lot of companies sold out American manufacturing to make greater margins by making parts overseas. At that point he realized that the had to move up market. He saw that the company needed to get into more highly engineered products than simple connector pins. He said it gave him purpose to keep manufacturing in the United States and create rewarding, good careers for Americans. (17:00)

Mike talks about the parts that go into musical instruments which Precision Plus produces. He says the company has been making parts for that customer since before he arrived at the company. They make screws and arbors that go into oboes, bassoons, and piccolos. (19:00)

Noah asks Mike what he thinks of when he hears the word “happiness.” Mike says it means being successful and being in control of your destiny. He says its important to him that Precision Plus is a private company where he has the freedom to make the decisions that are best for the company. (20:30)

Mike says the key to future growth for Precision Plus is continuing to increase the complexity of the parts it produces, setting it apart from other companies making more commodity-type parts. He says the way to accomplish this is by investing in better machines and pushing his people to keep upping their game. (21:20)

Mike talks about the roles of his various machines. He says there are no bad machine tools, just bad applications of machine tools. He says the Tornos cam Swiss machines are still a good solution for lower complexity parts with tight tolerances. For more complex parts Precision Plus uses Miyano CNC lathes. He holds up an aerospace parts the company makes complete on a triple turret machine, which he says had 98 different features on the print. (See video below). He says the shop also features many Tsugami and Star CNC Swiss machines that produce great parts and have great support. (22:15)

Mike says Precision Plus is interested in acquiring another machining company if he can find the right fit. He would prefer to buy a turning company not doing automotive work located in the Midwest because he likes the work ethic that the Midwest is known for. Also it would be best if the company can also add to Precision Plus’s current capabilities. (25:40)

Mike says the thing that bothers him the most running a machining company is that not everyone sees the world as he does, and he can’t stand missed opportunities. He says the most important thing is for people to work to the best their abilities, with a positive attitude, no matter what they are tasked with. (26:35)

Question: What do you think of when you hear the word “happiness?”