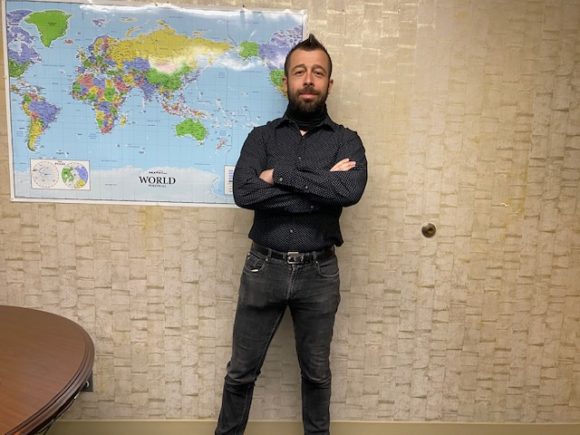 Today’s show is the first episode of a multi-part series about how machining companies acquire new work.

Our guest is Federico Veneziano, CFO and COO of American Micro Products Inc., a precision machining company in Batavia, Ohio. Federico says one his key strategies for getting new customers is proving to them his company will minimize the problems that are bound to occur in most manufacturing jobs.

Federico talks about how the selling process in the machining business has changed in the last few years. He says there are fewer face-to-face meetings now, but he still prefers the traditional human touch. (3:20)

Federico gives an overview of American Micro. The company is located in Batavia, Ohio, just outside of Cincinnati, and it was founded in 1957. It mostly focuses on turning, but also does milling. It makes parts for the automotive, aerospace, and defense sectors, along with a little bit of industrial and medical. American Micro’s workforce fluctuates between 150 and 200 people. It has also had a factory in China since 2005, with around 100 employees. (4:20)

Federico came to the United States in 2004, working for the machine tool builder DMG. He did technical support and service, process engineering, and sales, which gained him a lot of knowledge of machining companies and cultures around the world. He worked on American Micro’s Gildemeister GMC35 CNC multi-spindles, which eventually led to him coming to work there. (6:40)

Federico hates to say it, but aerospace is one of American Micro’s most significant markets, so it has been hit hard by the current troubles of the commercial aerospace industry. The company has had success doing specialized automotive parts such as fuel diesel components and parts for steering pumps. Defense is becoming one of the company’s most important sectors. He says the medical industry has been harder to penetrate because it requires a company to have established contacts already in the business. (8:20)

Federico says one of American Micro’s strategies is to stay in markets it already knows well so it can provide good service to customers. The company uses databases and other resources to find potential customers and then contacts them via phone or email. If a job seems like it has potential, the company tries to set up a meeting to do a presentation, where sales representatives talk about the added value American Micro can provide beyond just price. Federico says he tries to identify potential customers’ pains and then come up with solutions to their problems. He says this is the key to getting new jobs. (10:30)

Federico reiterates that it’s important to make a value proposition beyond a good price per part. He says the constant emphasis today of customers choosing venders exclusively on the basis of price is diluting the value of manufacturing. He says price pressure causes work to go overseas, which creates new complications that sometimes make parts more expensive than if they were made in the United States. He says it worries him particularly when some sectors move overseas, such as aerospace and defense because a drop in quality could have dangerous ramifications. (13:30)

Federico says meeting customers in person is important for American Micro to get to know them and understand the problems they are dealing with.(15:35)

Federico says it’s important for salespeople to have a technical understanding of jobs so they can set realistic expectations for customers. He says in the past there may have been enough margin that even if suppliers couldn’t reach their promised results, they could still meet their customers needs, but that usually isn’t possible nowadays. (16:40)

Federico says in China getting work is an entirely different process than in the United States. It usually consists of an online bidding process. However, he says that model doesn’t necessarily apply to American Micro because foreign companies in China usually do work for other foreign companies, not Chinese companies. This enables some personal relationships. He says payment processes are totally different in China than in the United States. (19:00)

Federico discusses the negotiation process for machining jobs. He says the process depends on whether a product is ongoing and established or if it is a new product. If the product is already being produced by someone else, a buyer will either offer an expected target price or they will ask the supplier to propose a price first to see if they can get a better deal. Federico says he thinks it’s best if the customer starts out by giving their target price because if the target price is dramatically different from what a supplier can offer it will be a waste of time to try to make a deal. Also, he says if everyone is pushing as hard as they can to get the best price possible it will hurt the market as a whole. Every deal will become based on price, rather than important value added services and longterm relationships. He says it can be a problem when traditional salespeople do the negotiating because their commission might be their only concern. (20:20)

Noah asks if American Micro prefers to buy equipment before the company has work for it or wait to acquire the work first and fill the need with a machine. Federico says it’s great if you can get jobs for equipment a company already has. He says if American Micro buys a machine for a specific job, it needs firm long-term agreements in place to insure the work for the machine. However, he admits it can still be risky, so it’s important to have knowledgeable people making deals, increasing the likelihood jobs will be executed. He says 15-20 years ago, long-term agreements were less common than today. (29:30)

Federico projects 2021 to a be a decent year for American Micro, but it’s important to the company that aerospace makes a comeback. Based on the company’s market research he thinks in August the sector will ramp up. For other sectors he is bullish. He was surprised that automotive was not hurt significantly by the pandemic in 2020. (31:30)

Federico says he thinks small and medium manufacturers should collaborate more, rather than always fighting for work. He says constantly fighting for work causes a lot of jobs to be decided only by price, which hurts the quality of parts in the overall market. He says companies should instead divide up work based on each company’s strengths, rather than every company trying to hoard all the jobs. (32:40)

Question: Do you prefer to buy a machine before you have any work for it, or buy equipment only when you have a job for it?