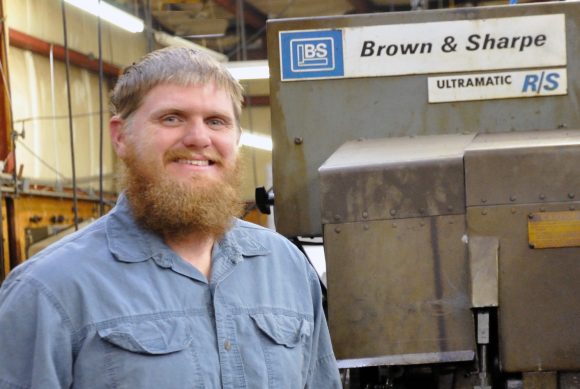 Today’s podcast is part two of an interview we did with David Wynn, CFO of ABF Engineering and Machining, a third generation screw machine shop in South Fulton, Tennessee. Dave makes a lot of his profits on mechanical screw machines that are older than him, but he emphasizes using advanced technology to automate his business’s processes.

Scroll down to listen to the interview

(2:15) David says it is important that his employees be driven individuals. He wants people who can work independently in a loosely structured shop environment. His employees can divide their work amongst each other as they want and structure their time how they want as long as they meet production goals. Dave says the more power you give your people, the better they perform.

(3:55) Dave says his goal is to one day have someone else handle the day to day responsibilities of his company so he can focus on growing the business by improving customer relationships and automating business processes. He says he would like to be able to step off the face of the earth for 30 days and and then return seeing the company running smoothly as though he never left.

(8:20) Dave discusses his goal to automate every part of the business that takes his mind away from the key tasks at hand. He says his shop has one button that turns off the all the lights, regulates air conditioning, turns off exhaust fans and everything else necessary to leave the building.

(10:20) Dave talks about the parts he is making on his Brown and Sharpes. He says if he has a high production run he can often can get a closer tolerance on a Brown and Sharpe than a modern CNC machine because the machine is rigid like a tank.

(13:35) Dave says he does not see his company as competing with China. He says his parts are not commodity parts because he often does short runs of 500 pieces or less. He jokes that “a Brown and Sharpe was a CNC before CNC was cool.”

(18:20) Dave says he is glad he went to business school rather than going straight into the machining business out of high school because it taught him to determine the values of assets. He says his dad had actually forced him to go to college.

(20:35) Dave says he sees purpose in the machining business because every mechanism people use has parts that have been machined. He appreciates creating tangible products rather than merely creating liquidity in the finance industry.

Question: Is a college education important for running a machining business?