Ep. 101 – Prototyping on a Desktop CNC Mill with Zach Dunham 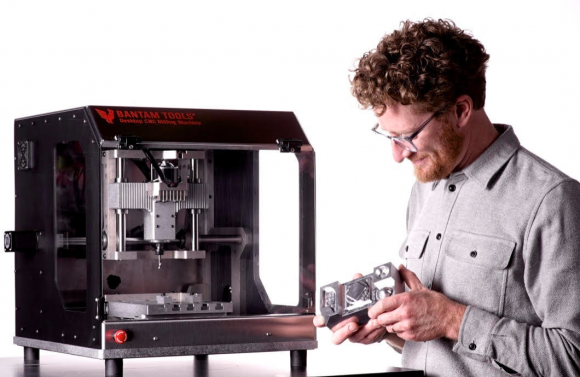 On today’s podcast we’re continuing our 5th season, discussing companies that machine their own products.

Our guest is Zach Dunham, Director of Marketing at Bantam Tools, a company which builds an 80-pound desktop CNC milling machine that costs under $4,000. This machine is designed for both novice and experienced machinists who want to quickly prototype and tweak new products.

Zach describes Bantam Tools as a company that builds desktop CNC milling machines, with a focus on precision and reliability at an affordable price. The company has two products in their current lineup, including its new desktop CNC mill that was released in July of 2020. The company is based Peekskill, New York, and employs around 15 workers. (3:10)

Zach talks about the types of products made on desktop CNC milling machines (SEE ABOVE). He says the machines are often used to make “everyday carry items” like bottle openers and aluminum wallets. He says Bantam Tools’ machine has the capability to produce almost anything (aluminum, wood, or plastic) that can be made on a 7 x 3 x 9 machine with 3 axes, even more complex items like a small synthesizer (see video). He says that the target market for the company’s products are people who prototype. The machine is optimized for aluminum, but it can machine engineered plastics and wood as well. Some customers even create circuit boards with it. Machining other metals is not impossible, but it is difficult because the mill does not use coolant. (4:10)

Zach shares his background. He studied music composition at Bard College in New York, a good part of which involved electronics and recording arts. He worked as a sound designer for a while, and dabbled in acoustics, which led to getting interested in hardware. He taught himself much of what he knows about electronics. He launched his own product called The Public Radio, a single station FM radio, which is still being sold. Eventually he took a job with the crowd funding platform Kickstarter, teaching people how to launch hardware products. (6:30)

Zach talks more about his work at Kickstarter, helping customers launch new design and technology products. Toward the end of his time at the company, he worked with digital fabrication products. He gives examples of the kinds of products he helped bring to market, including a desktop waterjet cutter and a CNC machine that pulled itself around a table with cabling. (8:35)

Zach discusses the Bantam Tools Desktop CNC milling machine. He says a few hundred customers have pre-ordered the machine. Many of these customers are hobbyists or people who work primarily with 3D printers who are looking to add CNC capabilities to their workshop. The company also has orders from machine shops that need in-house prototyping capabilities. (11:10)

Zach says people can make the same things with the Bantam Tools CNC desktop mill that they would make on larger CNC desktop mills, such as fixtures, flanges, and gears, but Bantam Tools’ machine weighs 80 pounds and costs less than $4,000. Also, unlike other competing CNC mills in a low price range, Bantam Tools’ machine comes with a several things to help a user get started, including a t-slot bed, toe clamp fixturing setup, a 28,000 RPM spindle, at least one nice tool by Helical Solutions, and modern control software with a lot of interesting features. (15:00)

Zach says that the main benefit of the desktop mill is that it is fast and easy to use, which helps both novices and experienced machinists. Customers with access to full machine shops find it fills a unique role because it is cost effective and prevents tying up heavy duty machining centers with small runs or prototypes. It also is useful as a hands-on primer or training tool. (17:30)

Zach talks about the unique software Bantam uses for its desktop machines. The software accepts G-code files, NC files, and similar file extensions. There are post-processors for Fusion 360 and other CAD packages as well. It also can accept vector files from Adobe Illustrator. He says a preview feature allows you to see what the tool looks like before production. (19:55)

Zach speaks about the benefits of developing a new product in-house rather than with a third party job shop. He says it may not be cost effective to outsource a single small item or a prototype because of the amount of time it takes to set up the tools for a new part. He says a designer can waste a lot of time and money especially if they don’t have experience in machining and production. Bantam Tools’ CNC mill allows a user to become more literate in designing and how the machining process works. (24:40)

Zach describes the pros and cons between prototyping on a desktop CNC mill and a 3D printer. He says that most 3D printers can only use brittle plastics like PLA, while others may use ABS or engineering plastics. Bantam Tools’ CNC mill can machine aluminum and often can make objects faster than a typical 3D printer. (30:05)

Zach talks about something new he learned last week. The company recently purchased a Datron single flute ball end-mill, which was new to him. He says the science and physics that go into choosing an end-mill he finds fascinating. (30:50)

Zach says Bantam produces all the major parts for its desktop CNC mill in-house. The company has two large Mazak machining centers for production. He says only the motors and screws are outsourced. (32:20)

Zach says that the company is running 6-8 weeks behind on fulfilling orders for their machine due to COVID-19. The company’s workers been challenged to practice social distancing while on the production line and performing R&D. (33:15)

Zach says that anyone interested in Bantam Tools’ desktop CNC mills can find out more on the company’s website at bantamtools.com. The website features helpful videos, as well as product information. The company is also active on social media. The current waitlist for the new desktop CNC mill is five months. (35:25)

Question: Do you have a product you have been thinking about prototyping?