On today’s podcast I interview Dr. Doug Conroy of Conroy Orthopedic & Sports Physical Therapy. Doug has been treating injured folks for decades, including me as I rehab my left Achilles tendon. Our interview focuses on the negative effects a workplace environment can have on the human body.

Doug told me that in the past, workplace health risks were mostly associated with accidents in industrial settings. However, he says that many of today’s experts consider office jobs with constant sitting as possibly more dangerous to workers’ health, going as far as to characterize sitting as “the new smoking.”

(2:55) Doug explains his expertise in the field of orthopedic physical therapy.

(5:18) Doug explains that the association of workplace health risks with an industrial setting is changing. Arguably, the largest threat to the health of the working population is prolonged sitting, which he characterizes as “the new smoking.” 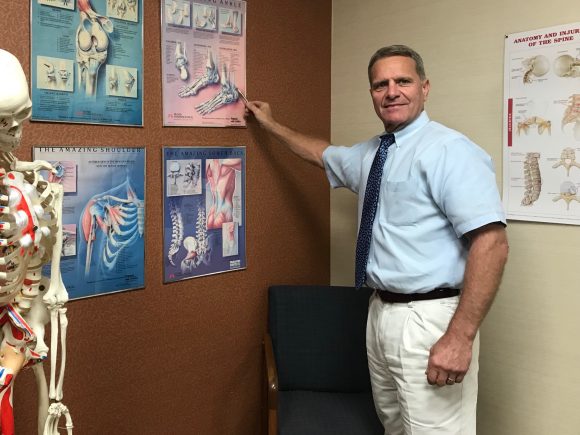 (11:00 – 16:00) Doug recommends workers change position after 20 to 30 minutes, regardless of their posture. He says that it is generally healthier to be a mechanic who moves around than to work at a desk.

(16:00) Doug explains how many people do not seek medical advice or physical therapy soon enough. As a result, it can take twice as long to reverse the bad habits their bodies have become accustomed to.

(17:00) Doug describes various scenarios where surgery should be performed or abstained from. He cites medical studies which show that many doctors recommend unnecessary surgeries.

(20:10) Doug talks about the use of prescription pain killers during recovery. He says they were overprescribed in the past, but the trend is changing.

(24:10) Doug talks about the improvements in knee, hip, and other joint replacement surgeries. In the past, joint replacements made sense only for older people because of the need to replace them every 10 to 15 years. With new advancements, the components that go into joint replacements are significantly improved so that more young people are receiving replacements.

(30:50) Doug discusses various sports injuries, such as damaged Achilles tendons, ACLs, ulnar collateral ligaments and thumb injuries. He compares the severity of those injuries and examines new developments in treatment.

(35:25) Doug reminds listeners to pay attention to what their bodies are telling them. He also says people need to share more information with doctors and physical therapists, in order to better their chance for recovery.

Question: Would you rather work in the shop or in the office?

5 thoughts on “Ep. 51 – Physical Therapist Doug Conroy on Protecting Your Body at Work”