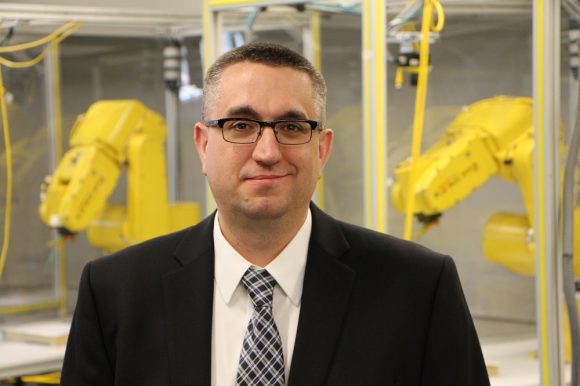 In today’s podcast we discuss what a person can get for $20,000 per year at a highly regarded technical college. Our guest is E.J. Daigle, Dean of Robotics and Manufacturing at Dunwoody College of Technology in Minneapolis, Minnesota. He is also lead faculty member of the school’s top ranked robotic snow plow team. Dunwoody College offers associate and bachelor degrees in a variety of fields, such as construction sciences, engineering, robotics, architecture, and machining.

E.J. explicitly talks about how Dunwoody emphasizes hands-on learning. He says that Dunwoody students in the machining department receive 15 hours of lab time per week working on equipment.

(2:55) E.J. gives the history of Dunwoody College, which was started in 1914 in Minnesota by William Hood Dunwoody, an entrepreneur who made his fortune as a silent partner in the Washburn Crosby company, which later became General Mills.

(5:45) E.J. describes Dunwoody as a polytechnic college that offers certificates, as well as associates and bachelors degrees. He says that the school believes in a “learn by doing approach,” and that it is not uncommon for Dunwoody students to be in lab (working on equipment) 8 to 15 hours per week.

(7:53) E.J. tells his personal story of going into the U.S. Navy out of high school, where he worked on nuclear submarines for 10 years. Before his first submarine was commissioned, E.J. worked in the shipyards alongside the people constructing the vessel, which he says gave him a good view into a variety of manufacturing processes.

(9:50) E.J. draws parallels between the hands-on learning style he experienced in the Navy to that at Dunwoody College.

(13:50) E.J. talks about how Dunwoody approaches the diverse previous academic backgrounds of its students, particularly in math.

(16:05) E.J. talks about the success of a significant portion of older students at Dunwoody who are former laid off autoworkers

(16:55) E.J. says Dunwoody graduates around 20 students a year from its Machine Tool Program and the school generally receives 300 requests to hire them.

(20:10) E.J. cites studies which say in the next 10 years the manufacturing industry will be 2 million workers short.

(23:00) E.J. says that a 2-year associate degree costs $40,000 in tuition. He says that last year’s Machine Tool class had a 100 percent job placement. He also says it is not uncommon for a third of the students in the Machine Tool Program to quit after only one year because they find jobs they like before graduating.

(27:40) E.J. says that Dunwoody encourages its associate degree graduates to continue their education with the school’s programs for entrepreneurship, management, or engineering. Often students work and go to school part-time to further their education.

(32:00) E.J. says that too many kids pick colleges based on the wrong criteria, rather than choosing based on what they are interested in doing after graduation.

(35:35) E.J. talks enthusiastically about his experience as the lead faculty member of Dunwoody’s autonomous robotic snow plow team, which is ranked number one in the world.

(39:00) E.J. discusses some of the extraordinary projects that Dunwoody graduates have worked on, such as making components for the Mars Rover, and components that went into the drills that saved the Chilean miners.

Question: Is higher education worth the money?