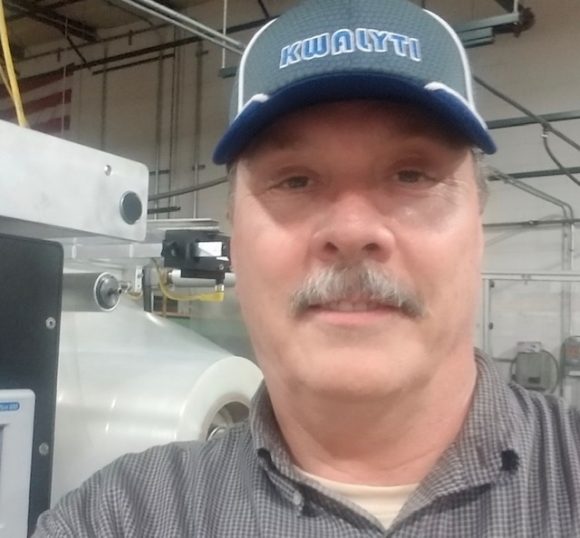 Today’s guest on the show is Gordon Erickson, founder of KWALYTI Tool in Batavia, Illinois. KWALYTI specializes in tooling up packaging machines, often for food products such as meat and cheese. Since the COVID-19 crisis began, KWALYTI has played an essential role in combating the epidemic. The company has tooled machines to package cotton swabs for coronavirus testing. Soon it will be tooling machines that produce pouches for holding N95 masks so they can be sterilized for reuse.

(2:45) Gordon talks about his company KWALYTI, a machine shop, located in the Batavia, Illinois. He says KWALYTI rebuilds and tools up vacuum packaging machines, primarily used in the meat and cheese industry. When you see the vacuum packages holding hotdogs or bacon they are probably produced with the type of machines his company works with.

(5:00) Gordon talks about tooling packaging machines for both the food and medical industries. For the medical industry KWALYTI has tooled machines that vacuum pack suture removal kits and packages of gauze. KWALYTI also services and troubleshoots the machines it supplies.

(9:30) Gordon says that KWALYTI has suppled three machines to Vienna Beef, the hotdog brand that Chicago is famous for.

(10:50) Gordon talks about how KWALYTI has been relied upon during the COVID-19 pandemic. He says when Illinois Governor Pritzker instituted the shelter in place order he quickly got a call from Vienna Beef and some other customers telling him the company needed to stay up and running because it was their main parts and service provider for their packaging machines. Also during the pandemic, demand for vacuum packaging machines arose when food that had usually gone to restaurants was diverted to grocery stores.

(13:30) Gordon talks about supplying molds to a company in Florida to change over its machines from packaging syringes to packaging nasal swabs for virus testing. He said the company was running three shifts a day making 3” swabs.

(15:30) Gordon says that KWALYTI is in the process of making a perforating system that goes onto a machine to makes special pouches. Medical workers will put their used N95 masks in the pouches, which then will undergo an autoclave sterilization process overnight so they can be reused the next day. An autoclave process exposes the pouches to 250 degree Fahrenheit direct steam. The pouches have one side made of plastic and the other side made of a material called Tivek.

(18:45) The same company that makes pouches to sterilize the masks also had KWALYTI make a tool to use in machines that make plasma bags. He says some of the tooling his company produces could have taken months to import from Germany, but he was able to produce them in a week.

(20:20) Gordon says he doesn’t point the finger at the government for not being more ready to deal with supply chain problems because nobody could predict what was going to happen. He says many critics are “hindsight engineers,” and in his case, suppliers knew right away they needed to insure food packaging machines stay up and running.

(23:40) Gordon says he likes his business because it helps people people make their ideas happen. He says that tooling machines to combat COVID-19 doesn’t give him much more purpose in his work than he had before because he always felt his products were vital. Though he says right now he has more pressure than usual to get products to customers faster.

Question: Should people wear face masks when they go out of the house?