Keystone XL environmental report: Is it ‘game over’ for pipeline foes? (+video) 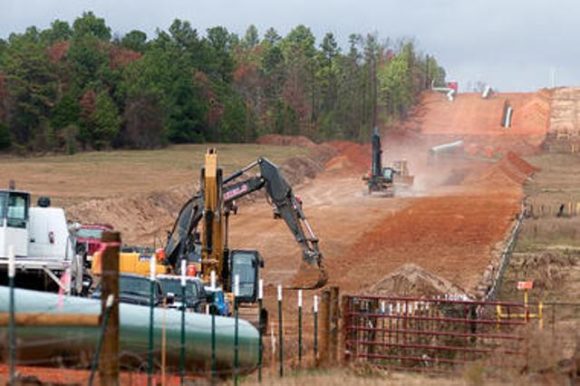 The State Dept.’s Keystone XL report found that the pipeline is unlikely to significantly add to global carbon emissions. But foes say the project still may not be in the ‘national interest.’

The US State Department has concluded that the proposed Keystone XL pipeline – the 875-mile long oil link from Alberta to the US Midwest and ultimately to Gulf Coast refineries – is unlikely to add significantly to global carbon emissions.

The much-anticipated finding in the final Environmental Impact Statement (EIS) on the pipeline, released Friday, thrilled energy producers and dealt a blow to environmentalists. They have long argued that the pipeline would supercharge development of Alberta’s tar sands deposits and contribute mightily to climate change by creating a global market for the sands’ diluted bitumen product.

By rejecting those assertions, the report paves the way for President Obama, who has staked out a strong position on fighting climate change, to approve the pipeline with far less political backlash should he so chose, some experts say.

The report Friday reaffirms a March 2013 Draft Supplemental EIS conclusion that the pipeline would not produce any significant additional greenhouse gases resulting from developing the tar sands.

“Approval or denial of any one crude oil transport project, including the proposed Project, remains unlikely to significantly impact the rate of extraction in the oil sands, or the continued demand for heavy crude oil at refineries in the United States,” concluded the multi-volume EIS.

The report, however, did acknowledge a “potential increase” in greenhouse gas emissions (GHGs) equivalent to the annual emissions of between 271,000 and 5.7 million passenger vehicles for 1 year – or the annual CO2 emissions of up to nearly eight coal-fired power plants. But the EIS market analysis showed that no such jump in added gas emissions was likely to occur.

Last June at Georgetown University, Mr. Obama declared that “our national interest will be served only if this project does not significantly exacerbate the problem of carbon pollution.”

“Though many considerations may factor into whether KXL is in the national interest, we would contend that the pipeline appears to have passed the President’s GHG test a second time,” writes Kevin Book, an energy analyst with ClearView Partners, an energy economics consulting firm in Washington.

Environmentalists, meanwhile, ruefully noted the report’s conclusions of a potential GHG emissions surge – while concluding it was unlikely.

“Even though the State Department continues to downplay clear evidence that the Keystone XL pipeline would lead to tar sands expansion and significantly worsen carbon pollution, it has, for the first time, acknowledged that the proposed project could accelerate climate change,” Susan Casey-Lefkowitz, international program director of the Natural Resources Defense Council, said in a statement. “President Obama now has all the information he needs to reject the pipeline.”

Before it can be approved, Obama must also decide whether the pipeline is in the overall national interest – a wildcard, both environmental and energy analysts agree. Some analyses have shown higher gasoline prices resulting. Despite that uncertainty, energy producers were cheered.

“Five years, five federal reviews, dozens of public meetings, over a million comments and one conclusion: the Keystone XL pipeline is safe for the environment,” Jack Gerard, American Petroleum Institute president and CEO, said in a statement. “This final review puts to rest any credible concerns about the pipeline’s potential negative impact on the environment. This long-awaited project should now be swiftly approved.”

Not everyone is so sure. Environmentalists say the “national interest” determination is a major hurdle for the project. If the project were found likely to raise gasoline prices in the Midwest that could undermine the momentum for approving the pipeline, some experts said.

The national interest determination could be concluded within as little as three months in the run-up to a final decision. But it could take far longer depending on how long the public comment portion extends, experts say.

Another wild card is that the State Department’s choice to lead the Keystone XL EIS review has also come under scrutiny for its ties to the oil and gas industry. Environmental Resources Management (ERM), a London-based environmental consultancy hired to perform the environmental review, is a member of at least five trade associations that have lobbied in support of Keystone XL, according to organizations’ websites and promotional material.

ERM has not publicly commented on the allegations and redirects press inquiries to the State Department, which has repeatedly said it maintains rigorous conflict-of-interest procedures which “ensure that no contractors or subcontractors have financial or other interests in the outcome of a project.”

The State Department’s inspector general is looking into the allegations and is expected to publish its findings in the coming month or two.

Other implications could soon loom as well. Mr. Book, the energy analyst, notes that the GHG analysis used in the Keystone XL could, ironically, make it far harder for other fossil fuels to show that they should be exported too – by providing a template for greenhouse gas analyses that could be negative for those energy exports.

“In a post-Keystone world, the next targets of opportunity [for GHG analysis and environmentalist opposition] could include: crude oil exports, crude-by-rail and the burgeoning trend of municipal fracking bans (to say nothing of ongoing opposition to coal ports in the Pacific Northwest),” Book writes.